Growing up in Maine, we were not taught much about World War II that didn’t involve fights with Nazis or the bombing of Pearl Harbor. And we weren’t taught about the many different battles, other than D-Day and Iwo Jima. In fact, for many years, I only knew that Okinawa was a place because of Mr. Miyagi and The Karate Kid.

But thanks to the magic of reading, and a surprising interest in military history that I discovered as an adult, I have read history books about the battle of Okinawa, and I now know all about it. The Okinawa battle is considered the last great battle of World War II, and some say also the bloodiest. As part of Operation Iceberg, the Navy’s Fifth Fleet and more than 180,000 U.S. Army and U.S. Marine Corps troops invaded the island on Easter Sunday, April 1, 1945, as a last strategic move towards Japan. The battle lasted 82 days, finally ending on June 22, 1945.

What happened in those 82 days is well-documented in many fantastic books. There are hundreds of stories of heroics and heartbreak. Here are six great books that explore the battle from many different angles. 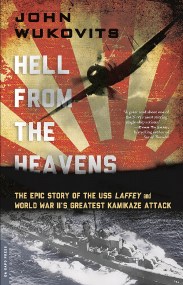 This book covers the largest single-ship kamikaze attack of World War II. On April 16, 1945, the crew of the USS Laffey endured and eighty-minute attack in which their small ship was bombarded by almost two dozen Japanese suicide aircraft. Historian and author John Wukovits recreated the event in the pages of this book using interviews with survivors, the memoirs of crew members, and the sailors' own wartime correspondence.

This item is a preorder. Your payment method will be charged immediately, and the product is expected to ship on or around April 5, 2016. This date is subject to change due to shipping delays beyond our control.

The Battle of Okinawa: The Blood and the Bomb by George Feifer

This is also a concise examination of the battle tactics on both sides and the huge casualties during the 82 days that led to the use of the atomic bombs. Feifer does an excellent job recounting the stories of fighting from some of the men who were there.

Sloan discusses why the American troops originally thought the battle of Okinawa would be brief, after Japanese troops allowed them to land unopposed on the shores on Easter, and how it quickly turned into one of the bloodiest battles in all of American history.

Major Art Shaw (1920-2020), a unit commander in the U.S. Army’s 361st Field Artillery Battalion of the 96th Infantry Division, was the first American officer ashore at Okinawa. This is his first-hand account of the three months he spent fighting for his life, the lives of others, and American freedom, during the last major battle of World War II.

Leckie was one of three Marines whose experiences were used by HBO for its 2010 miniseries about the Pacific Theater. He uses his knowledge of combat to give skilled analysis and accounts of the battle, and discusses the experiences of the men who fought on both sides in the battle of Okinawa.