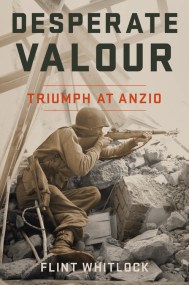 A riveting and comprehensive account of the Battle of Anzio and the Alamo-like stand of American and British troops that turned certain defeat into victory
The four-month-long 1944 battle on Italy's coast, south of Rome, was one of World War II's longest and bloodiest battles. Surrounded by Nazi Germany's most fanatical troops, American and British amphibious forces endured relentless mortar and artillery barrages, aerial bombardments, and human-wave attacks by infantry with panzers. Through it all, despite tremendous casualties, the Yanks and Tommies stood side by side, fighting with, as Winston Churchill said, "desperate valour."
So intense and heroic was the fighting that British soldiers were awarded two Victoria Crosses, while American soldiers received twenty-six Medals of Honor--ten of them awarded posthumously.
The unprecedented defensive stand ended with the Allies breaking out of their besieged beachhead and finally reaching their goal: Rome. They had truly snatched victory from the jaws of defeat.
Award-winning author and military historian Flint Whitlock uses official records, memoirs, diaries, letters, and interviews with participants to capture the desperate nature of the fighting and create a comprehensive account of the unrelenting slugfest at Anzio.
Desperate Valour is a stirring chronicle of courage beyond measure. 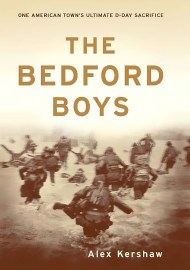 June 6, 1944: Nineteen boys from Bedford, Virginia--population just 3,000 in 1944--died in the first bloody minutes of D-Day. They were part of Company A of the 116th Regiment of the 29th Division, and the first wave of American soldiers to hit the beaches in Normandy. Later in the campaign, three more boys from this small Virginia town died of gunshot wounds. Twenty-two sons of Bedford lost--it is a story one cannot easily forget and one that the families of Bedford will never forget.
The Bedford Boys is the true and intimate story of these men and the friends and families they left behind. Based on extensive interviews with survivors and relatives, as well as diaries and letters, Kershaw's book focuses on several remarkable individuals and families to tell one of the most poignant stories of World War II--the story of one small American town that went to war and died on Omaha Beach. 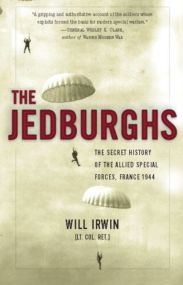 The story of the Special Forces in World War II has never fully been told before. Information about them began to be declassified only in the 1980s.
Known as the Jedburghs, these Special Forces were selected from members of the British, American, and Free French armies to be dropped in teams of three deep behind German lines. There, in preparation for D-Day, they carried out what we now know as unconventional warfare: supporting the French Resistance in guerrilla attacks, supply-route disruption, and the harassment and obstruction of German reinforcements. Always, they operated against extraordinary odds. They had to be prepared to survive pitched battles with German troops and Gestapo manhunts for weeks and months while awaiting the arrival of Allied ground forces. They were, in short, heroes.The Jedburghs finally tells their story and offers a new perspective on D-Day itself. Will Irwin has selected seven of the Jedburgh teams and told their stories as gripping personal narratives. He has gathered archival documents, diaries and correspondence, and interviewed Jed veterans and family members in order to present this portrait of their crucial role - a role recognized by Churchill and Eisenhower - in the struggle to liberate Europe in 1944-45. This is narrative history at its most compelling; a vivid drama of the battle for France from deep behind enemy lines. 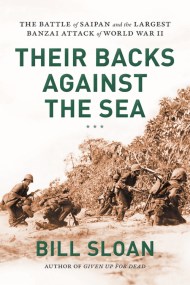 In the midst of the largest banzai attack of the war, US Army Lt. Col. William O'Brien, grievously wounded and out of ammunition, grabbed a sabre from a fallen Japanese soldier and flailed away at a small army of assailants, screaming to his men, "Don't give them a damn inch!" When his body was recovered the next day, thirty dead enemies were piled around him.

The Battle of Saipan lasted twenty-five hellish days in the summer of 1944, and the stakes couldn't have been higher. If Japan lost possession of the island, all hope for victory would be lost. For the Americans, its capture would result in secure air bases for the new B-29s that would put them within striking distance of the Japanese homeland. The outcome of the war in the Pacific lay in the balance.

In this gritty, vivid narrative, award-winning author Bill Sloan fuses fresh interviews, oral and unit histories, and unpublished accounts to describe one of the war's bloodiest and most overlooked battles of the Pacific theater. Combining grunt's-view grit with big picture panorama (and one of the ugliest inter-service controversies of the war), Their Backs against the Sea is the definitive dramatic story of this epic battle -- and an inspiring chronicle of some of the greatest acts of valor in American military history. 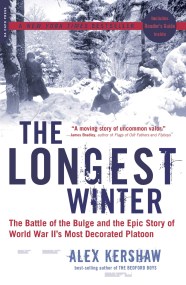 The epic story of the vastly outnumbered platoon that stopped Germany's leading assault in the Ardennes forest and prevented Hitler's most fearsome tanks from overtaking American positions
On the morning of December 16, 1944, eighteen men of the Intelligence and Reconnaissance platoon attached to the 99th Infantry Division found themselves directly in the path of the main thrust of Hitler's massive Ardennes offensive. Despite being vastly outnumbered, they were told to hold their position "at all costs." Throughout the day, the platoon repulsed three large German assaults in a fierce day-long battle, killing hundreds of German soldiers. Only when they had run out of ammunition did they surrender to the enemy. But their long winter was just beginning.
As POWs, the platoon experienced an ordeal far worse than combat-surviving in wretched German POW camps. Yet miraculously the men of the platoon survived--all of them--and returned home after the war. More than thirty years later, when President Carter recognized the platoon's "extraordinary heroism" and the U.S. Army approved combat medals for all eighteen men, they became America's most decorated platoon of World War II.
With the same vivid and dramatic prose that made The Bedford Boys a national bestseller, Alex Kershaw brings to life the story of these little-known heroes--an epic tale of courage, duty, and survival in World War II and one of the most inspiring episodes in American history. The Longest Winter is an intensely human story about young men who find themselves in frightening wartime situations, who fight back instinctively, survive stoically, and live heroically.