"Employing an enviable skill with both plotting and prose, Gareth Hanrahan has in The Gutter Prayer woven an intricate and finely crafted web of compelling characters navigating a city rich in dark and original wonders. I await the sequel with the keenest anticipation."—Anthony Ryan on The Gutter Prayer
"A gripping tale that meshes beautifully with its fascinating, darkly inventive setting."—James Islington on The Gutter Prayer
"The Gutter Prayer is captivating and complex. Guerdon is a city that seethes with history, horror, and hidden secrets, and Hanrahan's assured style is reminiscent of China Mievelle in the best way possible."—Nicholas Eames on The Gutter Prayer
"A groundbreaking and extraordinary novel . . . Hanrahan has an astonishing imagination."—Peter McLean on The Gutter Prayer
"Readers who enjoy the intricate worldbuilding of Patrick Rothfuss, Mark Lawrence, Max Gladstone, and Steven Erikson should start with the first volume before tackling this satisfying sequel."—Library Journal on The Shadow Saint
"Beautifully written. Gripping. Guerdon is the city of my dreams."—Anna Smith Spark on The Gutter Prayer
"This is genre-defying fantasy at its very best. An absolutely stunning debut. Insanely inventive and deeply twisted. I loved it! Highly recommended."—Michael R. Fletcher on The Gutter Prayer
"With living candles, ancient ghouls, broken gods, and more, The Gutter Prayer brims with cool and often twisted ideas."—Peter Newman on The Gutter Prayer
"Laced with the blackest of humor and packed with magic and mayhem, this is fantasy turned up to 11."—Anna Stephens on The Gutter Prayer
"Hanrahan brings the sights, sounds, and smells of Guerdon to life with crisp, lyrical prose that moves swiftly between thrilling action sequences and imaginative worldbuilding."—Publishers Weekly on The Gutter Prayer
"I will buy any novel that Gareth Hanrahan ever writes. ... The Shadow Saint is a brilliant book."—Fantasy Inn on The Shadow Saint
“Hanrahan’s RPG roots are clear, but it’s the incredible depth of his imagination that make his world and story unique. He takes traditional characters and settings, throws in his own unique and monstrous creations and builds something completely fresh.  Simultaneously familiar and completely original, The Sword Defiant is a treat for all fantasy fans, and especially for RPG players. It’s an absolute blast.”—Justin Lee Anderson, author of The Lost War
Read More Read Less

Lands of the Firstborn 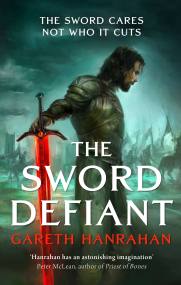