A couple of years ago, when I’d just graduated from college, scared out of my mind with no idea what the future would hold, humor kind of saved my life. “Ancient Greece isn’t hiring,” I told people who asked how my philosophy degree would influence my career path. “I’ll probably be permanently unemployed in the year 450 BCE.”

At first, I’d tried the whole, “I’ll probably go to law school!” approach, but that wasn’t the truth at all and telling that little white lie was making me feel worse and worse. The truth was I was petrified, and the only way I could access those emotions was by poking a little fun at myself. Once I started joking about my predicament, I was able to come to terms with it and eventually move past it.

Instead of law school, I ended up writing what would become my debut novel, Love and Other Carnivorous Plants. The story follows nineteen-year-old Danny’s summer after her freshmen year of college. It covers a lot of taboo subjects—eating disorders, mental health concerns, drug and alcohol abuse, and questioning one’s sexuality. Danny’s approach to such “touchy” issues is to joke about them, which results in a lot of humor for a book about some pretty serious stuff.

One of the beautiful things about fiction is its capacity to speak to real life issues in a person’s life, but to do that the characters (and of course, the author!) have to somehow find a way into what is otherwise hush-hush. So often taboo topics aren’t discussed at all because they are treated so seriously. And treating a subject as so serious that it can’t be joked ironically increases its taboo.

As a writer, humor gives me the permission to approach the things that society tells me I shouldn’t. It is the access point to otherwise unapproachable topics, and if we never approach such things, how can we expect to confront them at all? If Danny couldn’t joke about her bulimia, for example, she wouldn’t have been able to talk about it, which would have been a missed opportunity to really explore the pain (but also the occasional lol! moment) of her situation. Taboo creates shame and shame creates secrets, as well as shadows where even darker emotions hide. I think it’s much more important that difficult subjects be broached in the first place, especially because usually those difficult subjects make a person feel lonely and laughter is a universal connector. A good HAHA! brings people together at times when connection is most needed, and at some point the humor does fall away, making room for other emotions.

I am so grateful that humor exists as a way of shedding light on those parts of ourselves that most need it. Laughter allows transformation to occur through acknowledgment and acceptance of what is, regardless of how lousy things seem. When it comes to expressing our struggles, I say, as Vievee Francis does, “Say it. Say it any way you can.” Find a way in to a find a way out. Crying is inevitable. Why not let laughter be, too? 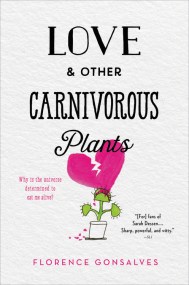 This acclaimed, darkly funny debut for fans of Jesse Andrews and Robyn Schneider about a teen who's consumed by love, grief, and self-destructive behavior is now in paperback.

Freshman year at college was the most anticlimactic year of Danny's life. She's failing pre-med and drifting apart from her best friend. One by one, Danny is losing all the underpinnings of her identity. When she finds herself attracted to an older, edgy girl who she met in rehab for an eating disorder, she finally feels like she might be finding a new sense of self. But when tragedy strikes, her self-destructive tendencies come back to haunt her as she struggles to discover who that self really is. With a starkly memorable voice that's at turns hilarious and heartbreaking, Love and Other Carnivorous Plants brilliantly captures the painful turning point between an adolescence that's slipping away and the overwhelming uncertainty of the future.

This item is a preorder. Your payment method will be charged immediately, and the product is expected to ship on or around May 15, 2018. This date is subject to change due to shipping delays beyond our control.