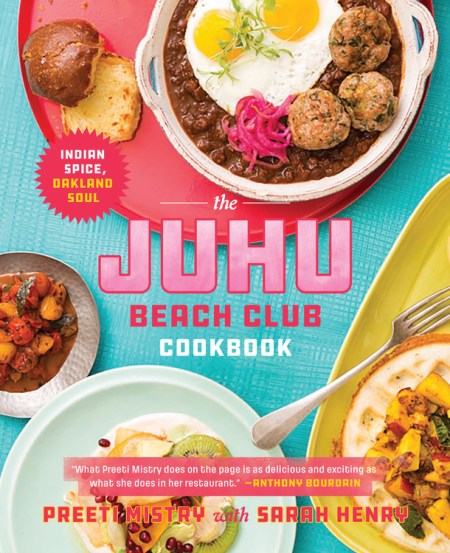 by Preeti Mistry by Sarah Henry
“What Preeti Mistry does on the page is as delicious and exciting as what she does in her restaurant.” — Anthony Bourdain

Influenced by her background as a second-generation Indian — born in London, raised across the US, now based in the Bay Area — Preeti’s irreverent style informs her personality and her food. This collection of street food, comfort classics, and restaurant favorites blends cuisines from across India with American influences to create irresistible combinations.

Organized by feeling rather than course or season, with chapters like Masala Mashups, Farm Fresh, and Authentic? Hell Yeah, The Juhu Beach Club Cookbook weaves Preeti’s culinary journey together with more than 100 bold, flavor-forward recipes to excite and inspire home cooks. Illustrated throughout with full-color photography and playful line art, this book captures the eclectic energy and wide-ranging influences of one of the West Coast’s most up-and-coming chefs. 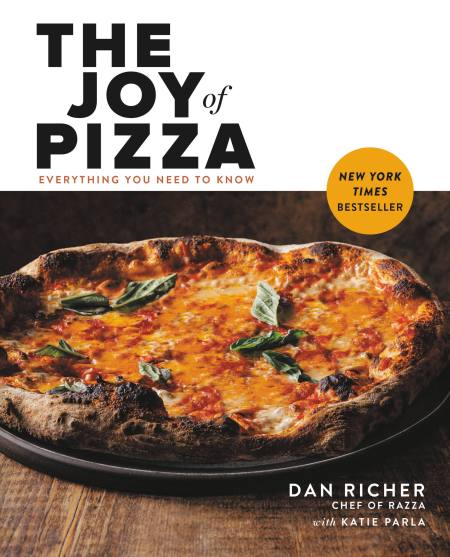 The Joy of Pizza

by Dan Richer With Katie Parla

NEW YORK TIMES BESTSELLER • Learn to make artisan pizza the American way in this accessible, informative guide to the perfect pie from the creator of "the best pizza in New York" (New York Times).

Pizza is simple: dough, sauce, cheese, toppings. But inside these ordinary ingredients lies a world of extraordinary possibility. With The Joy of Pizza, you’ll make the best pizza of your life.

Dan Richer has devoted his career to discovering the secrets to a transcendent pie. The pizza at his restaurant, Razza, is among the best one can eat in the United States, if not the world. Now, Richer shares all he has learned about baking pizza with a crisp, caramelized rim; a delicate, floral-scented crumb; and a luscious combination of sauce, cheese, and toppings that gets as close to perfection as any mortal may dare.

You’ll learn how to make Razza specialties such as:

Suited to beginning home bakers and professionals alike, these crusts begin with store-bought yeast as well as sourdough starter. Richer shows how to achieve top results in ordinary home ovens as well as high-temperature ovens such as the Ooni and Roccbox, and even wood-fired outdoor pizza ovens.

The Joy of Pizza is rich with step-by-step photography, links to instructional videos, and portraits of every pizza before and after it meets the heat of the oven—so you’ll know exactly what to do to create superior results.

The ingredients are simple. The methods are straightforward. And the results are deliriously delicious. 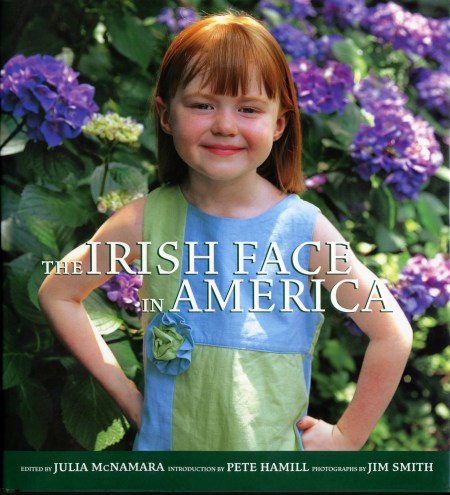 The Irish Face in America

by Jim Smith by Julia McNamara Other Pete Hamill 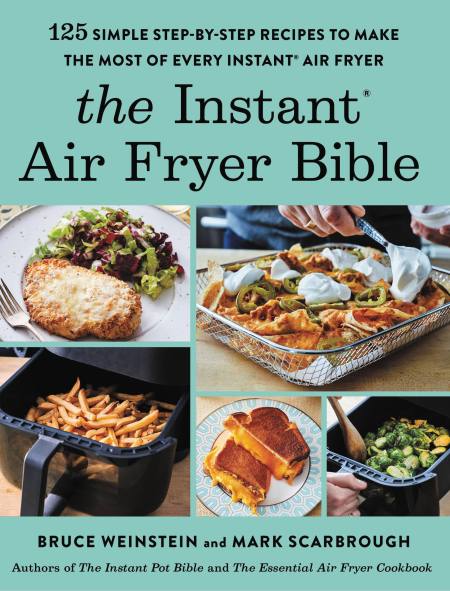 by Bruce Weinstein by Mark Scarbrough
A comprehensive, authorized guide to cooking in every model of air fryer from Instant Brands (and every other air fryer on the market) with 125 simple-but-delicious recipes–full of photos and easy step-by-step directions for beginners.

Bruce Weinstein and Mark Scarbrough are a trusted, popular guides for all things Instant Pot, and they bring this wisdom to this fully authorized book showing how to make the most of your Instant air fryer–regardless of size or model. A perfectly suited manual for beginners just learning about their new device, as well as those looking to explore new recipes, The Instant Air Fryer Bible is an essential step-by-step guide for the modern kitchen.

Start with the absolute best techniques for getting perfect results from the most commonly air-fried foods—from the instructions that are missing on your bag of frozen tater tots to the how-tos for a perfectly air-fried piece of chicken or salmon—then upgrade those basics with a wide variety of starters, sides and mains such as:Featuring beautiful photography and 125 surefire recipes, The Instant Air Fryer Bible is your solution to fast, convenient recipes that that achieve crispy, crunchy perfection in America's hottest new appliance. 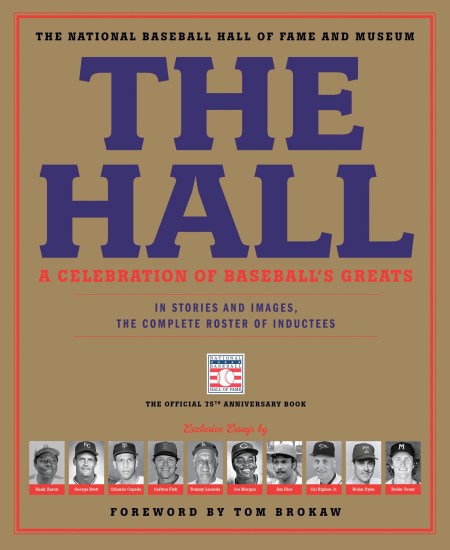 The Hall: A Celebration of Baseball's Greats

Everyone dreams of Cooperstown. It’s a hallowed name in baseball, for players as well as their fans. It’s a house where legends live; it’s everything that’s great about the game.

Never before has the National Baseball Hall of Fame and Museum published a complete registry of inductees with plaques, photographs, and extended biographies. In this unique, 75th anniversary edition, read the stories of every player inducted into the Hall, organized by position. Each section begins with an original essay by a living Hall of Famer who played that position: Hank Aaron, George Brett, Orlando Cepeda, Carlton Fisk, Tommy Lasorda, Joe Morgan, Jim Rice, Cal Ripken Jr., Nolan Ryan, and Robin Yount. 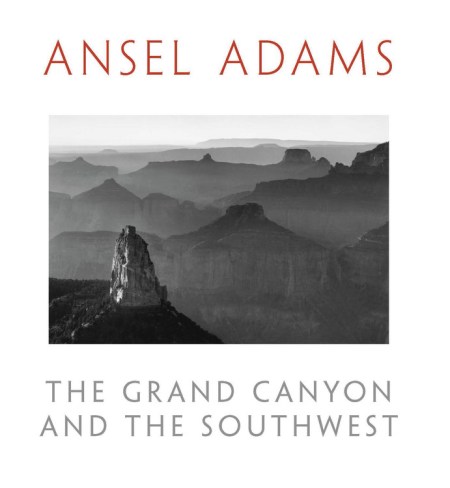 The Grand Canyon and the Southwest

by Ansel Adams Edited by Andrea G. Stillman
Honoring Grand Canyon National Park on its centennial, The Grand Canyon and the Southwest elegantly portrays the drama and the beauty of the Canyon and the American Southwest.
“It is all very beautiful and magical here–a quality which cannot be described. You have to live it and breathe it, let the sun bake it into you. The skies and the land are so enormous, and the detail so precise and exquisite…” – Ansel Adams
Next to Yosemite and the High Sierra, the Southwest was closest to Ansel Adams’ heart. It was there, in the early 1930s, that he was inspired to make photography his life’s work. He would return to the region again and again. In his words, “wherever one goes in the Southwest one encounters magic, strength, and beauty.”
Today, the Grand Canyon is one of America’s most popular national parks, hosting more than six million visitors each year. This special edition paperback reproduces Ansel Adams’ exquisite photographs of the Canyon alongside iconic images of the Southwest, spanning Arizona, California, Colorado, New Mexico, Texas, and Utah. Edited by Andrea G. Stillman with an introduction by William A. Turnage, this collection of seventy dutotone photographs is complemented by Adams’ vivid writings about his travels in the region.
The Grand Canyon and the Southwest is an ideal souvenir or gift for visitors to the Southwest, or for anyone inspired by its beauty. 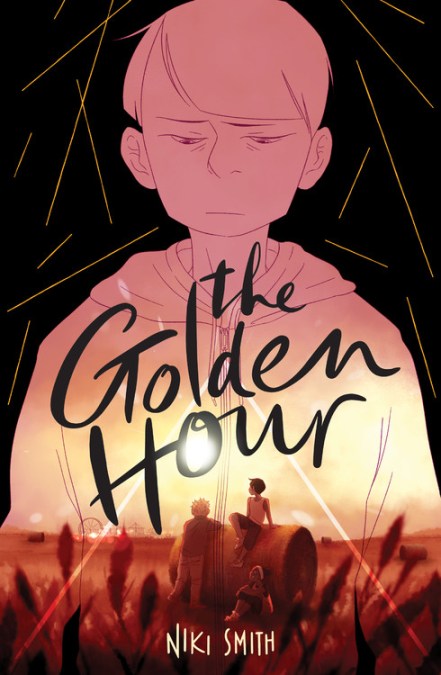 From the author of The Deep & Dark Blue comes a tender graphic novel, perfect for our time, that gently explores themes of self-discovery, friendship, healing from tragedy, and hope for a better tomorrow.

Struggling with anxiety after witnessing a harrowing instance of gun violence, Manuel Soto copes through photography, using his cell-phone camera to find anchors that keep him grounded. His days are a lonely, latchkey monotony until he's teamed with his classmates, Sebastian and Caysha, for a group project.

Sebastian lives on a grass-fed cattle farm outside of town, and Manuel finds solace in the open fields and in the antics of the newborn calf Sebastian is hand-raising. As Manuel aides his new friends in their preparations for the local county fair, he learns to open up, confronts his deepest fears, and even finds first love.

This title will be simultaneously available in paperback. 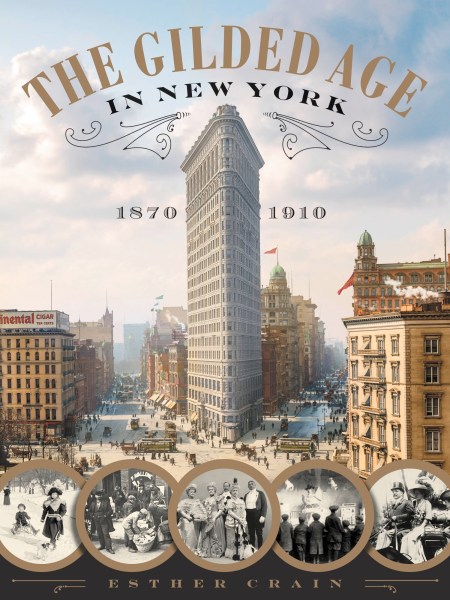 by Esther Crain
The drama, expansion, mansions and wealth of New York City’s transformative Gilded Age era, from 1870 to 1910, captured in a magnificently illustrated hardcover.

In forty short years, New York City suddenly became a city of skyscrapers, subways, streetlights, and Central Park, as well as sprawling bridges that connected the once-distant boroughs. In Manhattan, more than a million poor immigrants crammed into tenements, while the half of the millionaires in the entire country lined Fifth Avenue with their opulent mansions.

The Gilded Age in New York captures what is was like to live in Gotham then, to be a daily witness to the city’s rapid evolution.

The Gilded Age in New York is a rare illustrated look at this amazing time in both the city and the country as a whole. Author Esther Crain, the go-to authority on the era, weaves first-hand accounts and fascinating details into a vivid tapestry of American society at the turn of the century.

Praise for New-York Historical Society New York City in 3D In The Gilded Age, also by Esther Crain:
“Vividly captures the transformation from cityscape of horse carriages and gas lamps ‘bursting with beauty, power and possibilities’ as it staggered into a skyscraping Imperial City.” — Sam Roberts, The New York Times

“Get a glimpse of Edith Wharton’s world.” — Entertainment Weekly Must List
“What better way to revisit this rich period . . ?” — Library Journal 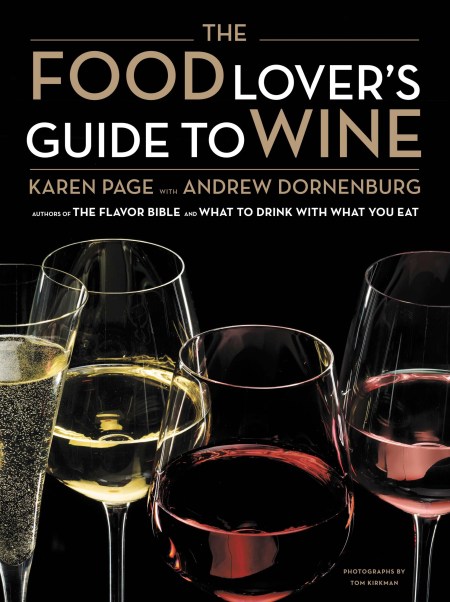 The Food Lover's Guide to Wine

by Karen Page by Andrew Dornenburg
A wine book unlike any other,The Food Lover’s Guide to Wine offers a fresh perspective via the single aspect of wine most compelling to food lovers: flavor.

At the heart of this indispensable reference, formatted like the authors’ two previous bestsellers The Flavor Bible and What to Drink with What You Eat, is an encyclopedic A-to-Z guide profiling hundreds of different wines by their essential characteristics-from body and intensity to distinguishing flavors, from suggested serving temperatures and ideal food pairings to recommended producers (including many iconic examples).

The book provides illuminating insights from dozens of America’s best sommeliers via informative sidebars, charts and boxes, which complement the book’s gorgeous four-color photography. Another groundbreaking work from two of the ultimate culinary insiders, this instant classic is the perfect gift book. 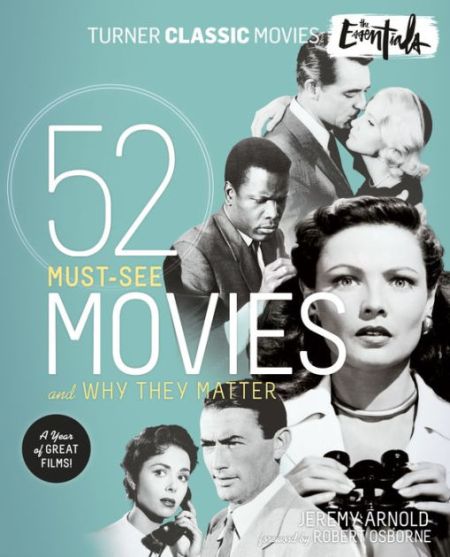 by Jeremy Arnold Foreword by Robert Osborne by Turner Classic Movies
Showcasing 52 Essential films from the silent era through the 1980s, Turner Classic Movies invites you into a world filled with stirring performances, dazzling musical numbers, and bold directorial visions that mark the greatest moments in film history.

Since its inception on Turner Classic Movies in 2001, The Essentials has become the ultimate series for movie lovers to expand their knowledge of must-see cinema and discover or revisit landmark films that have had a lasting impact on audiences everywhere.

Based on the TCM series, The Essentials book showcases fifty-two must-see movies from the silent era through the early 1980s. Readers can enjoy one film per week, for a year of stellar viewing, or indulge in their own classic movie festival. Some long-championed classics appear within these pages; other selections may surprise you. Each film is profiled with insightful notes on why it’s an Essential, a guide to must-see moments, and running commentary from TCM’s Robert Osborne and Essentials guest hosts past and present, including Sally Field, Drew Barrymore, Alec Baldwin, Rose McGowan, Carrie Fisher, Molly Haskell, Peter Bogdanovich, Sydney Pollack, and Rob Reiner.

Featuring full-color and black-and-white photography of the greatest stars in movie history, The Essentials is your curated guide to fifty-two films that define the meaning of the word “classic.”
Previous Page Next Page