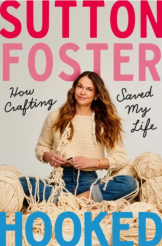 Grand Central Publishing is excited to announce the acquisition of HOOKED: How Crafting Saved My Life, a memoir and crafting book by Tony Award winning actress Sutton Foster. Suzanne O’Neill, VP, Executive Editor of Grand Central Publishing, acquired North American rights to the book from Mollie Glick at CAA. The book will be published simultaneously in hardcover, e-book and an audio edition, read by the author, by Hachette Audio on October 12, 2021.

Whether she’s playing an “aging” book editor on television or dazzling audiences on the Broadway stage, Sutton Foster manages to make it all look easy. How? Crafting. From the moment she picked up a cross stitch needle to escape the bullying chorus girls in her early performing days, she was hooked. Cross stitching led to crocheting, crocheting led to collages, which led to drawing, and so much more. Channeling her emotions into creations centered Sutton as she navigated the significant moments in her life and gave her tangible reminders of her incredible experiences. In HOOKED, Sutton shares those moments, including her fraught relationship with her agoraphobic mother; a painful divorce splashed on the pages of the tabloids; her struggles with infertility; the thrills she found on the stage during hit productions like Thoroughly Modern Millie, Anything Goes, and Violet; her breakout TV role in Younger; and the joy of adopting her daughter, Emily. Accompanying the stories, Sutton has included patterns, recipes, and so much more!

Witty and poignant, HOOKED will leave readers entertained as well as inspire them to pick up their own cross stitch needles and paintbrushes.

Sutton Foster is an American actress, singer, and dancer. She is best known for her work on the Broadway stage — for which she has received two Tony Awards for Best Performance by a Leading Actress in a Musical — as well as for her most recent role as Liza Miller on the critically-acclaimed, Darren Star helmed television series, Younger. Sutton previously played the lead role in the ABC Family comedy-drama Bunheads and appeared in Gilmore Girls: A Year in the Life. Sutton will return to the Broadway stage to star in the much-anticipated revival of The Music Man with co-star Hugh Jackman, opening in early 2022 and can be seen reprising her iconic role of Reno Sweeney in Anything Goes at London’s Barbican Theatre this summer.

About Hachette Book Group:
Hachette Book Group is a leading trade publisher based in New York and a division of Hachette Livre (a Lagardère company), the third-largest trade and educational publisher in the world. HBG is made up of seven publishing groups: Little, Brown and Company; Little, Brown Books for Young Readers; Grand Central Publishing; Perseus Books; Orbit; Hachette Nashville; and Hachette Audio.