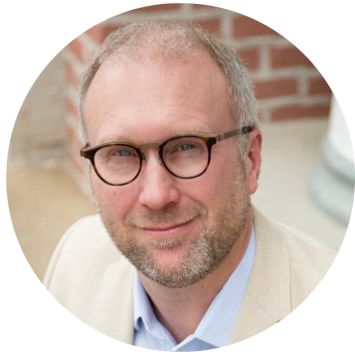 Mike Thomas grew up in Florida playing sports and riding his bike to the library and an arcade named the Cosmic Cowboy. He graduated from Liberty University, earning a bachelor’s degree in Bible Studies. When his son Peter was nine years old, Mike went searching for books that would teach Peter about the Bible in a fun, imaginative way. Finding none, he decided to write his own series. Mike Thomas lives in Murfreesboro, Tennessee, with his wife, Lori; sons Payton and Peter; and their dog, Hank.

What inspired you to write the Secret of the Hidden Scrolls series?

It started with a book report. I went on a search to find something for my nine-year-old son, Peter, to read. As a father and Christ-follower, I wanted a book that would help him discover the Bible and grow in faith. So I did what a lot of parents have done—I browsed through my local Christian bookstore.

Next I looked through Peter’s book report list from his Christian school. I found good literature, fiction, and biographies, but I couldn’t find anything that had the right balance of faith, adventure, and education. Undeterred, I took my search to Barnes & Noble.

When I made my way to the children’s section, I thought I had hit pay dirt. The shelves were filled with books created with children like Peter in mind. There were books about magic tree houses, funny kids, Greek gods, superheroes in underpants, and wizard schools—anything and everything the imagination could conceive. But none of those books contained the gospel-centered truth I was looking for.

After searching and knowing that Peter wouldn’t be young forever, I talked to him about my dilemma. He simply said, “Why don’t you just write one?”

It was hard to argue with that logic. So I decided to write the book I was looking for.

How do you get into the right frame of mind to write for this age group?

I read the books to classrooms full of children. I pay attention to their facial expression, their laughter, and sometimes their yawns. I picture those children when I am writing.

My prayer before I write is Psalm 19:14, Let the words of my mouth and the meditations of my heart be pleasing in your sight, O Lord, my strength and my redeemer. I want young readers to know God and I don’t want my words to get in the way.

Are your characters completely made up, or are they inspired by real people? 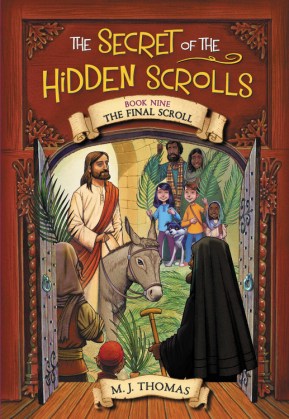 Hank is inspired by our family dog named Hank. As you can see, I was really creative in naming the characters.

The other main character is Great-Uncle Solomon. He is a made-up mixture of Indiana Jones, Willy Wonka, and C. S. Lewis.

The rest of the characters are based on the real people in the Bible stories they travel back in time to visit.

Can you tell us a little more about Peter, Mary, and Hank, and how they end up having these amazing adventures?

He shows them artifacts and treasures and tells them stories of his travels around the globe. Then he shares his most amazing discovery of all—the Hidden Scrolls! Uncle Solomon tells the kids that an ancient legend says these scrolls can help prove that the Bible is true.

Each scroll that Peter and Mary open takes them back to a different exciting event in Bible history. The kids have to race to solve the secret of each scroll, which is always a foundational truth about God, before time runs out and they get stuck in the past forever.