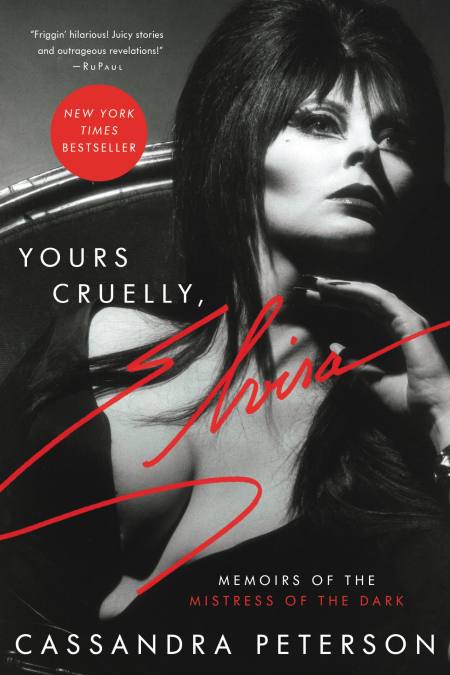 The woman behind the icon known as the undisputed Queen of Halloween, reveals her full story, filled with intimate bombshells, told by the bombshell herself. The paperback includes 32 new images and an original poem composed by Cassandra when she was 16, perfect for fans to collect.

At only eighteen months old, Cassandra Peterson reached for a pot on the stove and doused herself in boiling water, resulting in third-degree burns over 35 percent of her body. She miraculously survived, but burned and scarred, the impact would stay with her and become an obstacle she was determined to overcome. Cassandra left home at fourteen and supported herself as a go-go dancer. By age seventeen, she was performing as a showgirl in Las Vegas. Then a chance encounter with the “King” himself, Elvis Presley, inspired her to travel to Europe where she worked in film and toured Italy as lead singer of a band. She eventually made her way to Los Angeles, where she joined the famed comedy improv group, The Groundlings.
In 1981, as a struggling actress considered past her prime, Cassandra auditioned for a local LA station as hostess for their late-night horror movies. She got the job as “Elvira,” never imagining it would lead to fame and a forty-year career. Yours Cruelly, Elvira is an unforgettably wild memoir. Cassandra doesn’t shy away from revealing exactly who she is and how she overcame seemingly insurmountable odds. Always original and sometimes outrageous, her story is loaded with twists, travails, revelry, and downright shocking experiences. It is the candid, often hilarious, and sometimes heartbreaking tale of a Midwest farm girl’s long, strange trip to become the world’s sexiest, sassiest Halloween icon.

A New York Times Best Books to Give This Season selection.