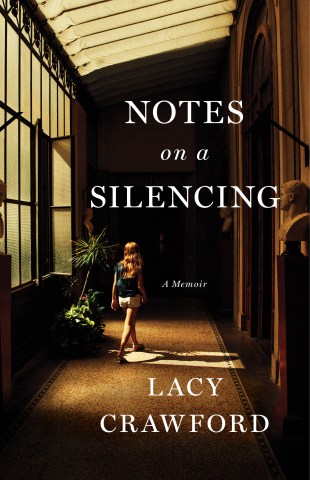 "A riveting story of and for our time." -Emily Temple, Lit Hub Most Anticipated Books of 2020

A riveting, lucid memoir of a young woman's struggle to regain her sense of self after trauma, and the efforts by a powerful New England boarding school to silence her--at any cost

When the elite St. Paul's School recently came under state investigation after extensive reports of sexual abuse on campus, Lacy Crawford thought she'd put behind her the assault she'd suffered at St. Paul's decades before, when she was fifteen. Still, when detectives asked for victims to come forward, she sent a note.
Her criminal case file reopened, she saw for the first time evidence that corroborated her memories. Here were depictions of the naïve, hard-working girl she'd been, a chorister and debater, the daughter of a priest; of the two senior athletes who assaulted her and were allowed to graduate with awards; and of the faculty, doctors, and priests who had known about Crawford's assault and gone to great lengths to bury it.
Now a wife, mother, and writer living on the other side of the country, Crawford learned that police had uncovered astonishing proof of an institutional silencing years before, and that unnamed powers were still trying to block her case. The slander, innuendo, and lack of adult concern that Crawford had experienced as a student hadn't been imagined as the effects of trauma, after all: these were the actions of a school that prized its reputation above anything, even a child.
This revelation launched Crawford on an extraordinary inquiry into the ways gender, privilege, and power shaped her experience as a girl at the gates of America's elite. Her investigation looks beyond the sprawling playing fields and soaring chapel towers of crucibles of power like St. Paul's, whose reckoning is still to come. And it runs deep into the channels of shame and guilt, witness and silencing, that dictate who can speak and who is heard in American society.
An insightful, mature, beautifully written memoir, Notes on a Silencing is an arresting coming-of-age story that wrestles with an essential question for our time: what telling of a survivor's story will finally force a remedy?

"Beautifully done... Notes on a Silencing is powerful and scary and important and true. Hats off to Lacy Crawford for telling this harrowing story. It will surely be an eye-opener for a lot of people, but not for me or millions of other women."—Sally Mann, author of Hold Still
"A shocking, anguished, beautifully written account of Crawford's sexual assault at the elite St. Paul's School in the days before #Me Too---and her belated understanding, after attacks at the school decades later, of just how badly the adults had failed her."
—People
"A studied, vulnerable, and maddening account... Crawford melds her personae as a teenage girl, a survivor, and a skilled narrator... Crawford's meditation on the effects of silence, shame, and belief, and the antidotes she had to invent for herself, will add to evolving discussions of sexual assault and power."
—Annie Bostrom, Booklist (starred review)
"A riveting story of and for our time."
—Emily Temple, Lit Hub Most Anticipated Books of 2020
"So beautiful it hurts to read... Assaulted by schoolmates, and then betrayed and silenced by her school and mine, Lacy Crawford has found courage to turn pain into searing voice in this beautiful memoir... For St. Paul's School, Notes on a Silencing could begin Truth and Reconciliation, or a chance to be delivered, as the school prayers ask: 'From the cowardice that dare not face new truths, from the lazy contentment with half-truths, and from the arrogance of thinking we know all truths.'"—Lorene Cary, author of Black Ice and If Sons, Then Heirs
"A harrowing, powerful memoir about sexual assault, trauma, and what happens when institutional power is deployed as a weapon against the vulnerable... Crawford's bravery in recounting her own experience speaks to how powerful it is to have these stories told, to show that no one is alone."
—Kristin Iversen, Refinery29
"A powerful, topical, and incisive memoir... Trenchant in its observations about the unspoken---and often criminal---double standards that adhere in elite spaces, Crawford's courageous book is a bracing reminder of the dangers inherent in unchecked patriarchal power."
—Kirkus Reviews
"Devastating... A stirring memoir of sexual assault and its aftermath."
—Publishers Weekly
Read More Read Less