If you’ve ever laughed your way through David Sedaris’s cheerfully misanthropic stories, you might think you know what you’re getting with Calypso. You’d be wrong.

When he buys a beach house on the Carolina coast, Sedaris envisions long, relaxing vacations spent playing board games and lounging in the sun with those he loves most. And life at the Sea Section, as he names the vacation home, is exactly as idyllic as he imagined, except for one tiny, vexing realization: it’s impossible to take a vacation from yourself.

With Calypso, Sedaris sets his formidable powers of observation toward middle age and mortality. Make no mistake: these stories are very, very funny–it’s a book that can make you laugh ’til you snort, the way only family can. Sedaris’s powers of observation have never been sharper, and his ability to shock readers into laughter unparalleled. But much of the comedy here is born out of that vertiginous moment when your own body betrays you and you realize that the story of your life is made up of more past than future.

This is beach reading for people who detest beaches, required reading for those who loathe small talk and love a good tumor joke. Calypso is simultaneously Sedaris’s darkest and warmest book yet–and it just might be his very best.

“Your English Is So Good” 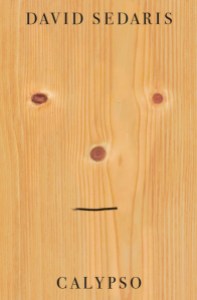 There’s a language instruction course I turn to quite often. Pimsleur, it’s called, and I first used it in 2006, when preparing for a trip to Japan. “I am American,” I was taught to announce, somewhat sheepishly, at the start of lesson one. Half an hour later, I’d advanced to 日本語がお上手ですね。, which translates to “Your Japanese is so good!”

It seemed a bit early in the game to be receiving compliments, but still I learned to recognize the phrase and to respond to it with ありがとうございます。ですが、私はまだそんなに上手ではありません。(“Thank you very much, but I am not really skilled yet”). This came in handy as, once I got to Tokyo, every time I opened my mouth I was clobbered with praise, even if I was just saying something simple like “Huh?”

The same was true with a number of other phrases I’d considered unnecessary but heard again and again once I arrived in Japan. The fact is that, unless we’re with friends or family, we’re all like talking dolls, endlessly repeating the same trite and tiresome lines: “Hello, how are you?” “Hot enough out there?” “Don’t work too hard!”

I’m often misunderstood at my supermarket in Sussex, not because of my accent but because I tend to deviate from the script.

Cashier: Hello, how are you this evening?

Me: Has your house ever been burgled?

Me: Your house—has anyone ever broken into it and stolen things?

With me, people aren’t thinking What did you say? so much as Why are you saying that?

I know that Pimsleur offers an English course for native Spanish speakers, but I’m not sure if it’s geared toward U.K. English or what you hear in the United States. The former would most certainly include “At the end of the day…” Turn on British TV or follow anyone named Ian for more than a few minutes, and you’re guaranteed to hear it. In France the most often used word is “connerie,” which means “bullshit,” and in America it’s hands-down “awesome,” which has replaced “incredible,” “good,” and even “just OK.” Pretty much everything that isn’t terrible is awesome in America now.

Pimsleur has made me hyperaware of the phrases I hear most often over the course of an average day, so aware that I’ve started jotting them down in hopes of putting together my own English program, one for business travelers visiting the United States. Let’s start at the airport newsstand, shall we? There, you’ll lay a magazine upon the counter and be asked by the cashier, “Do you need some water to go with that?” This will be said as if the two things should not really be sold separately, as if in order to properly read a copy of Us Weekly you’ll have to first rinse your eyes out with a four-dollar bottle of Evian.

The practice of pushing more stuff on you is called “upselling” and is one of those things that, once you notice it, you can’t stop noticing. At the airport in Baton Rouge a few years back, I ordered a coffee.

“Do you need a pastry to go with that?” the young man behind the counter asked.

“I wasn’t too shy to order the coffee,” I said, “so what makes you think I’d hold back on a bear claw if I wanted one?”

The fellow shrugged. “We have Danish too.”

This made me furious. “On second thought, I don’t want anything,” I told him. Then I went a few doors down to Dunkin’ Donuts and said, “I would like nothing but coffee. Just coffee. Period.”

The woman behind the counter crossed her arms. “No cup?”

“No milk or nothing?”

This always happens when I try to make a point. “And milk,” I told her. “Coffee in a cup with some milk in it but nothing else.” Then, of course, my flight got delayed by two hours and I had to go crawling back for some Munchkins. “Do you need coffee or a soda to go with that?” the woman who’d replaced the one I spoke to earlier asked.

Increasingly at Southern airports, instead of a “good-bye” or “thank-you,” cashiers are apt to say, “Have a blessed day.” This can make you feel like you’ve been sprayed against your will with God cologne. “Get it off me!” I always want to scream. “Quick, before I start wearing ties with short-sleeved shirts!”

As a business traveler, you’ll likely be met at your destination by someone who asks, “So, how was your flight?” This, as if there are interesting variations and you might answer, “The live orchestra was a nice touch,” or “The first half was great, but then they let a baby take over the controls and it got all bumpy.” In fact, there are only two kinds of flights: ones in which you die and ones in which you do not.

Next you’ll meet the desk clerk at your hotel, a woman most likely, in her mid- to late thirties. She won’t know if you’ve driven to this city or flown and will ask after taking your credit card, “So how was your trip in?”

There’s really no answer but “Fine.” I mean, there is, but I’m guessing she won’t want to hear it. Or would she?

Her: So how was your trip in?

You: Well, I was originally going to fly, but then this tiger offered to carry me very gently in her mouth. I said OK, but you know what? She wasn’t gentle at all. One of her teeth pierced my small intestine, so now, on top of everything else, I have to shit in a bag every day for the rest of my life!

Her: Well, that is just awesome. We’re all so glad you made it.

From Calypso, by David Sedaris