For a special spooky Halloween episode of The Current, our host Clive Priddle speaks to Amy Bruni on spirits, hauntings, and the spike in paranormal interest during the pandemic. Amy Bruni has been a paranormal investigator since 2007, when she began appearing on Ghost Hunters, one of the longest-running and highest-rated paranormal television shows. She is the author of the new book, LIFE WITH THE AFTERLIFE: 13 Truths I Learned about Ghosts – out now via Grand Central Publishing. 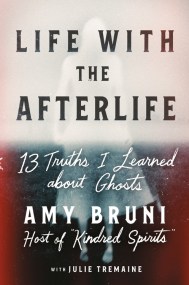 Life with the Afterlife

Star of Kindred Spirits and paranormal investigator Amy Bruni shares stories from her years of experiences with ghosts, organized around thirteen truths that guide her approach to the supernatural.

Amy Bruni, co-star of Kindred Spirits and one of the world's leading paranormal investigators, has learned a lot about ghosts over her years of research and first-hand experience. Now, in Life with the Afterlife, she shares the insight she has gleaned and how it has shaped her unique approach to interacting with the spirits of the dead and those who encounter them.

From her earliest supernatural encounters as a child, through her years appearing on Ghost Hunters and the creation of her company Strange Escapes, which offers paranormal excursions to some of America's most notoriously haunted destinations, and into her current work on The Travel Channel's Kindred Spirits, this book is full of astonishing and deeply moving stories of Amy's efforts to better understand the dead but not yet departed. With Amy's bright humor and fierce compassion for both those who are haunted and those who are haunting, Life with the Afterlife is an eye-opening look at what connects us as people, in life and beyond.