What interested you about writing ONE OF US? Where did the idea come from? 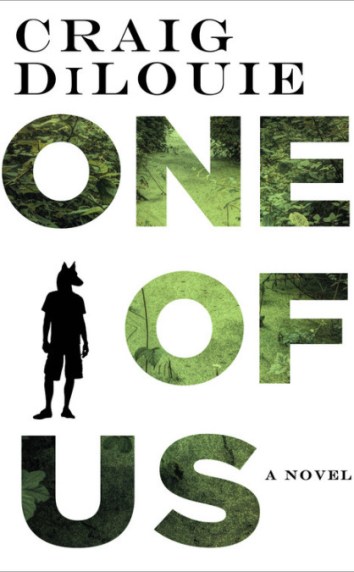 ONE OF US is a literary dark fantasy novel written for anybody who’s ever felt different. After a disease produces a generation of monsters, these children, now growing up in orphanages in the deep South, must somehow fit in–or fight for what’s theirs. The result is a tale of monstrous humans and human monsters reminiscent of The Island Of Dr. Moreau, Conquest Of The Planet Of The Apes, and To Kill A Mockingbird.

The concept originated in wanting to write a novel about prejudice, a very basic human trait, as it’s expressed on both an individual and institutional basis. The idea was to take this to the extreme. What if a generation of monsters was born, but they were only monstrous in appearance? How would they be treated, and what would that say about ourselves?

Another dimension is these monsters develop special powers at puberty. This would allow the monsters to pose a very real threat and have the means to resist. What if Spider-Man looked like a real spider? What if Super Man had horns? Would we still look up to them as heroes? Would they feel any responsibility for the human race that had rejected them in childhood?

For me, the concept was ideal for a Southern Gothic literary treatment. In Southern Gothic literature, it is typical to find a society in decay, taboo and the grotesque, prejudice in all its forms, and larger-than-life characters. The rundown rural setting and wonderful language make the monstrous both mundane and more fantastic.

What are you working on now?
I’m currently working on a novel about a brother and sister who find themselves fighting as child soldiers on opposite sides of a second American civil war. As with ONE OF US, I hope it will entice people to reflect.

When did you first start writing?
I remember becoming completely immersed in reading stories when I was very young, how they filled me with wonder. That wonder was my first real introduction to the magic of reading—that I could become someone else, live in their shoes, feel what they felt, and go on an adventure.

Very quickly, I realized I wanted to be the person creating these stories and inviting other people to share my imagination. From the age of nine, I wanted to be a writer. My first stories were pulpy, handwritten, partial novels about the end of the world, swords, and sorcery, that sort of thing. I spent a lot of time trying to be Robert E. Howard.

In later years, I became fascinated by human psychology—in particular, how people deal with crisis—and the titillating juxtaposition of the mundane and the grotesque, especially if it can teach us something about ourselves or our world. These themes have carried through to the majority of my work, which has taken me from science fiction to horror to literary dark fantasy.

It’s been a long and satisfying journey of learning, discovery, fellowship, and building a career. I’ve been writing fiction almost my whole life, but it was only in the past ten years I achieved any success with it. For me, the publication by Orbit is a dream come true, and I’m very grateful for and humbled by this accomplishment.

What were your favorite books/authors growing up? Which books/authors influenced your writing?
I grew up on pulpy, sword-and-sorcery fiction that inspired me to write, though my tastes became more sophisticated as they grew older. Now I read across the realm of speculative fiction. Many authors influenced me over the years, notably voices like J.G. Ballard, James Morrow, and Claire North, who elevate their stories with big ideas, along with authors like Cormac McCarthy, each of whom has something different to teach me about technique.

The last book I read that really impressed me was SISYPHEAN by Dempow Torishima, a mind-blowing journey into a biological sci-fi universe where genetically engineered life is both technology and economy.

What do you like about writing? What do you not like?
The best part about writing is when a project starts to come together, and the worst part is the uncertainty of the first baby steps. ONE OF US was a rare novel for me in that once I found the voice, it flowed out of me. It was a real joy to write. The challenge came after when my editor at Orbit believed the novel could reach a higher level. I found his vision exciting and worked hard to achieve it.

Do you have a designated writing space? What is your writing process?
For me, the novel always starts with an idea and theme that inspires a vision of what it will look, read, and feel like when it’s finished. Writing a novel is a massive undertaking, and if the idea is compelling, then it becomes something I have to do.

After I find the compelling idea, I do a lot of research and generally outline the work. I love the research phase, as it’s an opportunity to learn while generating tons of exciting ideas. Now I’m really starting to see the story in my head.

Then: I can write! One day at a time, one chapter at a time. Write a chapter, polish it a few times, and move on. During the writing, there’s nothing exciting to see—picture a guy sitting for hours in total silence other than the purr of his keyboard—though in my head all hell is breaking loose. When the novel is finished, I typically celebrate before the novel hangover sets in. After that…I start thinking about the next book.

When you’re not writing, what do you like to do in your spare time?
Being a speculative fiction writer allows me to scratch my thrill-seeking itch while remaining grounded for my kids. I’m a father of two little ones who mean the world to me, and a lot of my spare time goes to being the best dad I can be. Otherwise, I read, enjoy the arts such as theater, and binge on shows on Google Play. Writing’s always a big part of my life, as for me, it’s a hobby, income, and calling all rolled into one.

What advice would you give to aspiring writers?
Some accomplished authors make it and then give advice to the effect of, “Just do what I did.” Everybody’s writing and career path is different, however, and there are many forms success can take. My own career path looks like somebody falling up a flight of stairs—a lot of sweat, pain, and luck.

I can say generally what worked for me was to always be writing and chasing opportunity, and so I was more likely to be in the right place at the right time should luck break my way. In my opinion, the best way to succeed in fiction is to treat it as a very long game. You need enough confidence to put yourself out there and dream big but enough humility to understand that today, you are not the best writer you will be, that you need to constantly learn and grow while you produce.

Otherwise, the best advice I’ve received has been little things that nonetheless had a big impact on my writing game. I’d advise aspiring writers to look for that one key takeaway in your interactions with other writers, conferences you attend, and the how-to books you read. Nietzsche said a single sentence can change your whole world. Find that sentence and make it work for you, one sentence and one step at a time in building your craft and career.