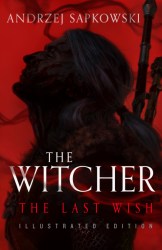 Orbit has announced the upcoming publication of a deluxe, illustrated edition of Andrzej Sapkowski’s The Last Wish, the book that launched the New York Times bestselling Witcher series. Set to be published in December 2021, the deluxe edition will be a hardcover featuring seven illustrations from seven different award-winning artists. It will be published by Gollancz in the UK. The cover was revealed today by Netflix as part of WitcherCon, a virtual celebration of the series.

The Last Wish introduces readers to the Witcher Geralt, and along with Sword of Destiny is one of the primary source materials for season one of Netflix’s hit series The Witcher. The collection features seven short stories about Geralt and the world of the Witcher, each of which will be paired with an original illustration. Artists who contributed illustrations include Jeremy Wilson, Tommy Arnold, Jen Bartel, and more.

The Witcher series and adaptations in multiple media are hugely popular worldwide. More than five million copies of the Witcher books have been sold in the United States, and the series has been translated into thirty-seven languages worldwide. The TV adaptation The Witcher was the second most-watched Netflix series release of 2019.

Lauren Panepinto, Orbit’s Creative Director, said: “One of the best things about working on The Witcher books is the wealth of great scenes and characters—both human and mythological—that beg to be depicted. It has been very enjoyable for me to design this deluxe edition of The Last Wish around so many great, diverse artists who are also Witcher fans! Each of them has a completely unique and exciting take on the characters and the world.”

To celebrate the launch of season two of The Witcher on Netflix, Orbit will also publish a tie-in trade paperback edition of Blood of Elves this November.

Andrzej Sapkowski, who is an international bestselling author and one of Poland’s most famous and successful authors, is also a recipient of the World Fantasy Award—Life Achievement, along with luminaries like Ray Bradbury, Roald Dahl, and Ursula K. Le Guin. Besides the Witcher series, he is also the author of the historical fiction Hussite Trilogy (The Tower of Fools and the upcoming Warriors of God and Light Perpetual).

About Orbit US
Orbit in the US is a division of Hachette Book Group, comprising the Orbit and Redhook imprints. Launched in 2007, the Orbit imprint has established itself as one of the market-leading SFF imprints in the US, and the fastest-growing imprint in the field. Orbit US authors include New York Times and international bestsellers Joe Abercrombie, Iain M. Banks, Trudi Canavan, M.R. Carey, Gail Carriger, James S.A. Corey, N.K. Jemisin, Ann Leckie, Kim Stanley Robinson, Andrzej Sapkowski, and Brent Weeks.

About Hachette Book Group
Hachette Book Group is a leading trade publisher based in New York and a division of Hachette Livre (a Lagardère company), the third-largest trade and educational publisher in the world. HBG is made up of seven publishing groups: Little, Brown and Company; Little, Brown Books for Young Readers; Grand Central Publishing; Perseus Books; Orbit; Hachette Nashville; and Hachette Audio.