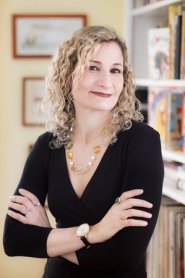 “In our conversations over the years, I’ve always felt that Christy is a kindred spirit—we share the same mission of publishing works that speak directly to young readers and that reflect the diversity of our world,” Tingley notes. “She is truly an ‘editor’s editor’—the fact that her long-time authors plan to move to Little, Brown with her is a testament to Christy’s dedication to nurturing both debut and established authors and to building fulfilling long-term careers for them. This is a rare opportunity to bring an established imprint to our division, and we are excited to welcome Christy, Jessica, and their extraordinary list of authors and illustrators and helping them flourish here.”

Christy Ottaviano has been with Macmillan for her entire twenty-eight-year career, launching her eponymous imprint at Henry Holt in 2008. She has published numerous notable books, including the National Book Award winner When Zachary Beaver Came to Town by Kimberly Willis Holt, Coretta Scott King–John Steptoe Award winner The Way a Door Closes by Hope Anita Smith, Laurie Keller’s popular Adventures of Arnie the Doughnut series, and multi-award winner Counting on Katherine: How Katherine Johnson Saved Apollo 13 by Helaine Becker and illustrated by Dow Phumiruk. Her list also includes New York Times bestselling series, Masterpiece by Elise Broach and Book Scavenger by Jennifer Chambliss Bertman, as well as works by Julia Alvarez, April Henry, Tanya Lee Stone, and Janet Tashjian, among many others.

“I am absolutely thrilled for the opportunity to grow my imprint at Little, Brown, working with Megan Tingley and her top-drawer team. I have long admired Megan’s sharp commercial sensibility and her creative, innovative book making both as an editor and a publisher and feel Little, Brown is the perfect home to take my imprint to the next level,” says Christy Ottaviano. “The Little, Brown list is second to none in quality, and, working together with my talented colleague Jessica Anderson, I am eager to bring my collection of retail-friendly and school and library–focused staples to the mix. I’m proud of my accomplishments at Macmillan, and especially the authors who have helped to define my list, and this next chapter promises to be bigger and better for all—we can’t wait.”

For more information about Christy and her books, please visit: http://christyottaviano.com