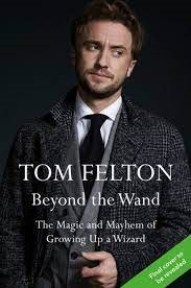 Grand Central Publishing is excited to announce the publication of BEYOND THE WAND: The Magic and Mayhem of Growing Up a Wizard, a magical coming-of-age memoir from Tom Felton, on October 18, 2022. Suzanne O’Neill, VP, Executive Editor of Grand Central Publishing, acquired North American rights to the book from Sarah Scarlett at Penguin Random House UK.

Billed as the first and only behind-the-scenes Harry Potter memoir from one of the films’ biggest stars, BEYOND THE WAND, will be published in print and digital formats by Grand Central Publishing in the US and Ebury Spotlight in the UK. An audiobook edition, read by the author, will be released simultaneously by Hachette Audio in the US and Penguin Random House Audio in the UK.

Tom Felton’s adolescence was anything but ordinary. His early rise to fame in beloved films like The Borrowers catapulted him into the limelight, but nothing could prepare him for what was to come after he landed the iconic role of the Draco Malfoy, the bleached blonde villain of the Harry Potter movies. For the next ten years, he was at the center of a huge pop culture phenomenon and yet, in between filming, he would go back to being a normal teenager trying to fit into a normal school.

Speaking with great candor and his signature humor, Tom shares his experience growing up as part of the wizarding world while also trying to navigate the muggle world. He tells stories from his early days in the business like his first acting gig where he was mistaken for fellow blonde child actor Macaulay Culkin and his Harry Potter audition where, in a very Draco-like move, he fudged how well he knew the books the series was based on (not at all). He reflects on his experiences working with cinematic greats such as Alan Rickman, Sir Michael Gambon, Dame Maggie Smith, and Ralph Fiennes (including that awkward Voldemort hug). And, perhaps most poignantly, he discusses the lasting relationships he made over that decade of filming, including with Emma Watson, who started out as a pesky nine-year-old whom he mocked for not knowing what a boom mic was but who soon grew into one of his dearest friends. Then, of course, there are the highs and lows of fame and navigating life after such a momentous and life-changing experience.

Tom Felton’s BEYOND THE WAND is an entertaining, funny, and poignant must-read for any Harry Potter fan. Prepare to meet a real-life wizard.

Tom Felton said: “I am beyond excited to announce the publication of BEYOND THE WAND. I’ve had these stories in my head for decades, and it’s been such a great experience for me to spend time putting quill to parchment. I can’t wait to share my story with Potter fans everywhere, and with every muggle that’s ever wanted to take a step closer to the wizarding world. Whether Hufflepuff, Ravenclaw, Slytherin or Gryffindork, I hope every witch and wizard will find a little bit of magic in this book.”

Suzanne O’Neill said: “It is our great pleasure to be Tom Felton’s US publisher. His portrayal of Draco Malfoy in the Harry Potter franchise is a cultural touchstone that has brought joy to so many people. Now with humor, candor, and a gift for storytelling Tom shares what it was like to grow up at the center of the zeitgeist, the lasting friendships he made on set, and what it was like to navigate fame after the series was done. Fans will not be disappointed by this entertaining and honest book.”

BOOK EXCERPT
“At lunchtime we would congregate in the canteen, which was always a fun moment. There was no separation of roles. An electrician would be queuing for his lunch next to a witch and a goblin, then a cameraman, a carpenter and Hagrid”.

ABOUT THE AUTHOR
Tom Felton is an English actor, best known for playing Draco Malfoy in the Harry Potter films. He has also appeared in Rise of the Planet of the Apes, Belle, The Flash, A United Kingdom, The Forgotten Battle and 2.22 A Ghost Story in London’s West End. He lives in London with his dog Willow.

About Hachette Book Group:
Hachette Book Group is a leading U.S. general-interest book publisher made up of dozens of esteemed imprints within the publishing groups Grand Central Publishing, Hachette Audio, Hachette Nashville, Little, Brown and Company, Little, Brown Books for Young Readers, Orbit, Perseus Books, and Workman Publishing.  We also provide custom distribution, fulfillment, and sales services to other publishing companies.  We are committed to diversity in our company and our publishing programs, and to fostering a culture of inclusion for all our employees and authors.  We are proud to be part of Hachette Livre, the world’s third-largest trade and educational publisher.  Learn more at hachettebookgroup.com.