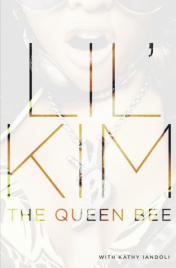 Mary Ann Naples, VP and Publisher of Hachette Books, announced today the forthcoming publication of THE QUEEN BEE (Hachette Books, 11/02/21), by Lil’ Kim, with Kathy Iandoli. The embargoed book is edited by Associate Editor Carrie Napolitano, who acquired World English rights in a deal with Robert Guinsler of Sterling Lord Literistic, Inc., and will be available in hardcover, eBook, and an audio edition by Hachette Audio.

When teenager Kimberly Denise Jones—better known as Lil’ Kim—burst on the hip-hop scene in the mid-nineties, no one was prepared for how she would shake-up the entire music industry. As the sole female member of the Notorious B.I.G.’s rap collective, Junior M.A.F.I.A., and an affiliate of Puff Daddy and the Bad Boy family, Lil’ Kim always stood out from the pack. But she was determined to make an even greater name for herself and emerged as a solo superstar. In 1996, she dropped her solo debut album, Hard Core, which topped the Billboard charts, went double-platinum, and is now widely considered to be one of the most influential rap albums of all-time. With her dynamic lyricism, her unflappable no-nonsense attitude, her iconic looks both on and off the red carpet, and her unapologetic sexuality, Lil’ Kim quickly established herself as a force to be reckoned with—and was crowned the Original Queen Bee.

Twenty-five years later, this Grammy award-winning superstar has released five studio albums, sold millions of records, topped the Billboard charts, performed all over the world, and remains at the top of her game. And yet few people ever knew about the hard work, hustle, and heartbreak that went into securing her place on the throne—until now. In this debut memoir, Lil’ Kim reveals everything that really went on behind-the-scenes of her legendary career, much of it for the very first time publicly. From her earliest rap beginnings growing up in Bed-Stuy, Brooklyn, and her teenage years spent with the Notorious B.I.G. to her rise as a solo icon, Lil’ Kim not only blazed trails for women in hip-hop, but also inspired the careers of those who followed. However, life at the top hasn’t been easy, either. Lil’ Kim also talks about the hidden moments of her reign: her complicated high-profile relationships, the misogynistic industry she fought to change through sex positivity, the challenging double standards of self-image and beauty in the spotlight, and the momentous act of loyalty that ultimately landed her in prison.

A true page-turner from start to finish, THE QUEEN BEE is every bit as fierce, empowering, and badass as the woman at the heart of this story—and firmly cements her legacy as a true feminist icon.

“I’m excited to finally get to tell my story after all this time,” Lil’ Kim said. “Many people have thought they knew the story of Lil’ Kim but they have no idea. I’m thrilled Kathy and I have put together something special with Hachette Books for my fans.”
“Hachette Books is dedicated to bold authors with a story to tell—and few artists embody this mission more than the legendary icon and trailblazer Lil’ Kim, with her deeply personal and revealing memoir THE QUEEN BEE,” said publisher Mary Ann Naples.

About the Authors:
Kimberly Denise Jones is the female rap legend better known as Lil’ Kim. In 1996, she changed the face of hip-hop with the release of her solo debut album, Hard Core. Since then, Lil’ Kim has remained a backbone of hip-hop culture, from fashion icon to actor, model, and entrepreneur. A Grammy award-winning and multi-Platinum artist, Lil’ Kim has released five solo studio albums, four mixtapes, and over twenty hit singles both of her own and as a featured artist.

Kathy Iandoli is the critically acclaimed author of God Save The Queens: The Essential History of Women in Hip-Hop and the forthcoming Baby Girl: Better Known as Aaliyah. Iandoli has written for Vibe, The Source, XXL, Village Voice, Rolling Stone, Billboard, Pitchfork, Playboy, Cosmopolitan, Maxim, The Guardian, Vice, and many other publications. She has held editorial positions at top hip-hop/urban websites and is an alumna-in-residence of Music Business at New York University.