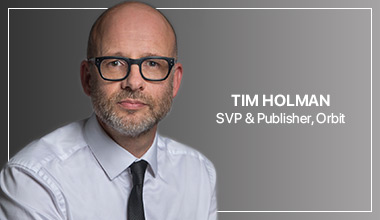 Tim Holman joined HBG in 2006 to launch the Orbit SF and Fantasy imprint within the Little, Brown division. In 2008, he was appointed Vice President and Publisher when Orbit and graphic novel and manga imprint Yen Press were brought together to create a new publishing division. He joined the Executive Management Board of HBG in 2009.

Tim began his publishing career in the UK in 1991, following a short course at the St James’s Secretarial College, London (44 wpm, 97% accuracy). He joined Orbit in 1992 as an Editorial Assistant and became Editorial Director of the imprint in 1997, quickly establishing it as the UK’s market-leading SFF imprint. In 2002, he set up the Atom imprint publishing YA fiction, and launched Stephenie Meyer in the UK.

Since relocating from London to New York in 2006, he has continued to oversee Orbit in the UK, where it is an imprint of Little, Brown Book Group.

Tim graduated from the University of Manchester in 1989 with a first-class BA (Hons) degree in English Language and Literature.