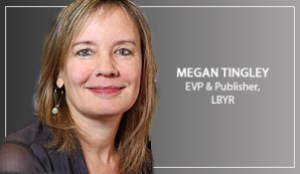 Megan Tingley serves as Executive Vice President and Publisher of Little, Brown Books for Young Readers at Hachette Book Group USA, Inc. She began her publishing career at Little, Brown as an editorial assistant in the children’s book department and celebrated her twenty-fifth anniversary with the company in 2012. Megan was named one of the 50 Top Women in Book Publishing by Book Business magazine and has been on the board of the Children’s Book Council since 2008.

As publisher, Megan oversees the publication of editorial, design, marketing, and publicity of books for children and young adults, including novelty, picture books, middle reader and young adult fiction and nonfiction, and licensed properties. Little, Brown Books for Young Readers is the home of an impressive array of admired and bestselling writers, including Sherman Alexie, Julie Andrews and Emma Walton Hamilton, Paolo Bacigalupi, Marc Brown, Libba Bray, Cornelia Funke, Kami Garcia and Margaret Stohl, Shannon Hale, James Patterson, Jerry Pinkney, and Lemony Snicket. During Megan’s tenure as publisher, LBYR has had winners and finalists in all the key awards: Caldecott, Newbery, Printz, and the National Book Award, and she acquired Stephenie Meyer’s Twilight Saga, one of the most successful and influential series of novels in the past decade.

During her entire editorial career, Megan has been committed to publishing distinguished books that celebrate diverse voices and points of view and that invite young readers to express themselves freely and fight for their beliefs. Some of the notable books she has published include Luna by Julie Anne Peters, the first young adult novel to explore the experience of a transgender teen, and Harlem Stomp! A Cultural History of the Harlem Renaissance by Laban Carrick Hill, both of which were named National Book Award finalists; It’s Okay to be Different by Todd Parr; and the You Read to Me, I’ll Read to You series by Children’s Poet Laureate Mary Ann Hoberman.

In recognition of Megan’s support of humanitarian and literacy efforts, she has received the Time Inc. Andrew Heiskell Award from Time Inc. and the Marjorie Guthrie Leadership Award, and been named a Reach out and Read Literacy Champion.

A graduate of Macalester College, where she studied comparative literature, Megan lives in Westchester, New York, with her husband, writer Dan Zevin, and their two children.