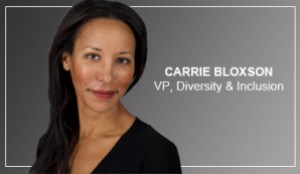 Carrie Bloxson (Vice President, Diversity and Inclusion) joined Hachette Book Group as VP, Diversity and Inclusion, in February 2021. Carrie oversees HBG’s diversity and inclusion programs and strategy with the objective of creating a more diverse, inclusive, and equitable company with increased representation of people of color in HBG’s leadership, workplaces, and publishing programs.

Carrie was previously interim CEO and Chief Marketing Officer at DoSomething.org, the largest social impact organization for young people in the world. Under her leadership, DoSomething received numerous social impact awards including multiple Shorty Social Good and Digiday awards, along with OMMA Marketing Excellence, Civvy, Pollie and Reed awards. She was also named a Top Women in PR Honoree for Social Impact in 2020 from PR Newswire.

Earlier, she was Vice President of Marketing at HarperCollins for six years and launched a variety of audience development campaigns that contributed to multiple bestselling titles. Carrie’s work was awarded the FutureBook award and a Webby shortlist nomination in 2016.

Carrie is a co-founder of CMOs for Good, an organization of marketing leaders who oversee social impact, and a board member for Avenues for Justice, an Alternative to Incarceration program for youthful offenders in NYC.