I put this together to try to reflect all the things that Elvis was capable of. It’s not a “Best Of” – though it could in one sense reflect that. I hope it will surprise listeners who may not be familiar with all these recordings and may lead them in turn to explore new directions of their own.  (And not just Elvis!)

The last song he recorded at Sun, a transformative song, a spiritual song despite its secular nature.  Elvis would continue singing it (and singing it well) right up till the end of his life.

One of Elvis’ most beautiful ballads. Written by Doc Pomus and Mort Shuman,  it is like a dream sequence out of a Gene Kelly film plunked into the middle of Viva Las Vegas.

Nothing can compete with it. Nothing could top it. Just listen to the trailing laugh at the end for its note of pure spontaneity and joyfulness.  It is the perfect definition of Sun founder Sam Phillips’ counter-perfect credo of “perfect imperfection.”

Elvis had many musical mentors,  none more so than the Statesmen Quartet’s lead singer, Jake Hess. Here we have the closest we will ever get to a duet between  the two of them – though it’s been reduced to more of a “group sing” in the final mix. Still, it is lifted up by the feeling Elvis got from the music, and the inspiration he got from Hess, in this jaunty statement of belief.

An extension of the natural, easy-rocking feel that Elvis first hit upon with “Don’t Be Cruel” four years earlier – as Sam Phillips said of the latter, “Now there is a groove.” What is it? It’s not blues, it’s not really a rocker, and it’s not pop – it’s just Elvis as he has come to know himself, with a stellar Nashville “A-team” accompaniment.

This in a sense is the only song that Elvis ever really wrote –even if his principal contribution came from suggesting its title and keening lyrical refrain to cowriter Red West. It’s perfectly clear, though, that he is singing, tenderly and heartbreakingly, about his mother.

As much as this song can stand on its own as his second hommage to Arthur “Big Boy” Crudup (the first, of course, was “That’s All Right”), it also points to Elvis’ own rapidly evolving stylistic independence. Here for the first time he makes full use of the studio potential of his band (Scotty and Bill on guitar and bass, with D.J. Fontana on drums), creating a sound both separate from, and an extension of, his Sun recordings. And it points the way to his breakthrough “Hound Dog”/“Don’t Be Cruel” session a few months later, at which Elvis for the first time, and with only one exception pretty much for all time, proclaims himself to be his own producer.

Simple, classic, as beautifully sung as anything he ever did, this is heart-wrenching in a way that Elvis could never entirely achieve in his early recordings. By one of his favorite songwriters Don Robertson, and, like so many of his best songs, an interpretation, not a recapitulation. The same applies to another Don Robertson song from  the same session, “I Met Her Today.”  I can’t choose between them

Just a great blues, with Elvis’ own acoustic rhythm guitar providing the intro and a sturdy underpinning all the way through. A real knock-out in which Elvis gets totally caught up (it seems like he just can’t stop), and, like “Mystery Train,” fully realized in a single take.

If you want to be convinced that Elvis brought something new to the party, just listen to the original country number (it’s great!), and compare it to the towering drama that Elvis imparts to it here. A highlight from one of his greatest albums, the Chips Moman-produced (this is the single non-self-produced exception mentioned above) From Elvis in Memphis.

More of the same, only more so. This was not in any way part of the plan for the 1969 Chips Moman sessions. In fact, with Elvis at the piano, it appears to arise from a purely spontaneous moment, as Elvis gets so lost in the gospel-infused feeling that he brings to this sentimental 1947 Eddy Arnold “heart song” that he simply can’t let go. By the end, he is out there almost entirely on his own, as the musicians struggle to keep up.

And to wind up this trilogy of Pentecostal passion, Elvis brings so much feeling to this inspirational (i.e. secular, not explicitly religious, but not far removed either) wind-up for the ’68 television special that you think he could never do it again. And yet if you seek out the outtakes, you will find that he does, again and again. With all the passion and belief at his command – forget the words, the subtext provided by his vocal really does proclaim his hope (and maybe even more than that) for a better world. 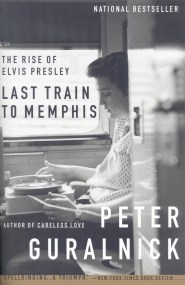 Written with grace, humor, and affection, Last Train to Memphis has been hailed as the definitive biography of Elvis Presley. It is the first to set aside the myths and focus on Elvis' humanity in a way that has yet to be duplicated.A New York Times Notable BookWinner of the… Read More