Back in 2007, I published a gem of a book, Firegirl by Tony Abbott, about what happens when a severe burn victim joins a seventh-grade class. It’s a quietly powerful book about compassion that shows that even the smallest of gestures can make a difference in a person’s life.

Firegirl went on to win the Golden Kite Award, and it sold consistently for more than a decade, drawing in new readers every year. So when Tony asked me what I thought about him writing a companion book starring one of the side characters from Firegirl, I immediately told him, “Yes!” And thus, The Great Jeff was born.

Jeff Hicks was the snarky joker and sometime bully in Firegirl, and in The Great Jeff we see him in a much larger public school he’s been forced to attend because of money problems. When his single mother loses her second job in a year, their downward spiral to homelessness begins. It’s a very real portrait of a family living in poverty in the United States, and it’s also a book about loneliness and enduring friendship, hope, and resilience.

Although we do see some of the other characters from Firegirl in The Great Jeff, it completely works as a stand-alone novel in its own right. Firegirl remains one of the books I’m most proud to have published, but Tony and I agree that The Great Jeff is an even better book. You’ll have to decide for yourself! 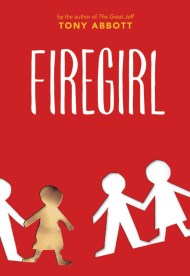 This poignant novel about a boy's friendship with a burn victim is perfect for fans of R. J. Palacio's Wonder

From the moment Jessica arrives, life is never quite the same for Tom and his seventh-grade classmates. They learn that Jessica has been in a fire and was badly burned, and will be attending St. Catherine's will receiving medical treatments. Despite her appearance and the fear she evokes in him and most of the class, Tom slowly develops a tentative friendship with Jessica that changes his life.

This item is a preorder. Your payment method will be charged immediately, and the product is expected to ship on or around June 1, 2007. This date is subject to change due to shipping delays beyond our control.