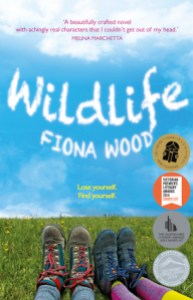 During a semester in the wilderness, sixteen-year-old Sib expects the tough outdoor education program and the horrors of dorm life, but friendship drama and an unexpected romance with popular Ben Capaldi? That will take some navigating.New girl Lou has zero interest in fitting in, or joining in. Still reeling from a loss that occurred almost a year ago, she just wants to be left alone. But as she witnesses a betrayal unfolding around Sib and her best friend Holly, Lou can’t help but be drawn back into the land of the living.

★ “Wood builds a believable story of misguided friendship, betrayal, and empowering growth…  Refreshingly, Wood depicts only positive, validating sexual experiences for both Sib and Lou, in which they each have full agency over their bodies and their choices with their partners. With exceptional candor, honesty, and nuance, Wood tells a heartening and compelling story of the importance of agency, self-confidence, and true friendship.” — Booklist, starred review

★ “Lou and Sib relate losing their virginity with such refreshing candor that Wildlife validates the sexuality and sexual needs of girls everywhere. This is Sib’s takeaway, too: although gorgeous guys like Ben may be hard to resist, they are not in charge.” — School Library Journal, starred review

★ “[B]eautifully executed…  Wood’s understanding of teenage voice shines in this dual account of unlikely friendship. Fresh, funny, and heartbreaking, the story manages to capture the complexities of two separate coming-of-age stories and wrap them into a cohesive tale of self-reliance and honesty. Sib’s hopefulness and Lou’s crushing grief act as a narrative balance, as do their differing (yet frank and relevant) accounts of sex and intimacy.” — Voices of Youth Advocates, starred review

“A beautifully crafted novel with achingly real characters that I couldn’t get out of my head.” — Melina Marchetta, author of the Printz Award-winning Jellicoe Road