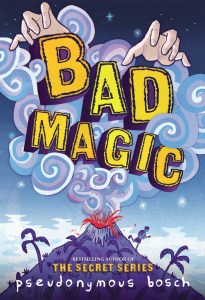 Magic is BAD.  As in fake. Cheesy. Unreal. At least, that’s what Clay, who has seen one magic show too many, thinks.

When words from his journal appear mysteriously on his school wall as graffiti, he never imagines that magic might be to blame. And when the same graffiti lands him at Earth Ranch, a camp for “troubled” kids on a remote volcanic island, magic is the last thing he expects to find there.

But at Earth Ranch, there is one strange surprise after another, until Clay no longer knows what to expect. Is he really talking to a llama? Did he really see a ghost? What is the scary secret hidden in the abandoned library? The only thing he knows for sure is that behind the clouds of vog (volcanic smog), nothing is as it seems. Can he solve the riddle of Earth Ranch before trouble erupts?

Elusive author Pseudonymous Bosch introduces an extraordinary new series that will have you believing in the unbelievable.

“Bosch employs, to great effect, his signature irreverence and hilarity packed into parenthetical asides and footnotes. The end result is a wacky, suspenseful mashup of Shakespeare’s The Tempest and a summer camp tale that is a delight to read. Bad Magic is a clever and playful novel. An excellent addition to middle grade fiction collections.” —School Library Journal

“Bosch breaks the fourth wall and becomes the story’s omniscient narrator. It is not as full of ciphers as the Secret series but still contains threads of mystery, magic, word games, and snark. There are spatterings of interesting and odd tidbits, vocabulary words, and witticisms in the form of footnotes. It is suspenseful, humorous, clever, and most importantly, fun. Bad Magic is definitely entertaining for a wide range of readers.” —Voices of Youth Advocates 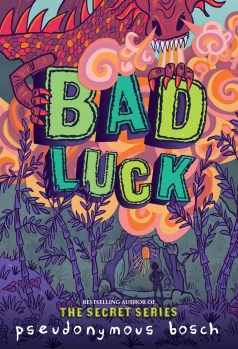 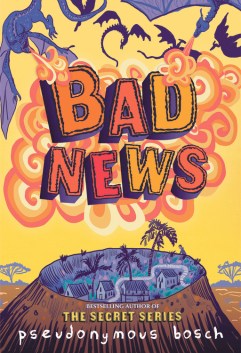