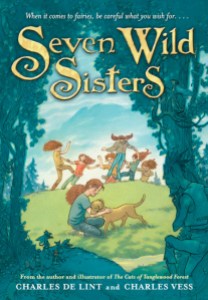 This captivating adventure from two masters of modern fantasy is a story of magic, family, and the power in believing in both. Sarah Jane has always wanted to meet a fairy, but she has no idea that the tiny wounded man she discovers in the Tanglewood Forest is about to ensnare her in a longtime war between rival magical clans. When her six sisters are kidnapped and split up by the opposing sides, she’ll need the help of several friends–from the reclusive Aunt Lillian to the mysterious Apple Tree Man–to bring them home. But if they don’t untangle themselves from the feud quickly, they could all be trapped in the fairy world forever. In a starred review, Publishers Weekly noted “the lyrical narrative blends a contemporary setting with a fairy tale that might have been plucked from a distinctly different time and place.”

* “The lyrical narrative blends a contemporary setting with a fairy tale that might have been plucked from a distinctly different time and place.” –Publishers Weekly, starred review

“There is an elegance and thoughtfulness to both the text and accompanying illustrations that elevates the story…. Folktale and fairy tale fans who are seeking a longer adventure into which to settle will find this a perfect fit.” –The Bulletin