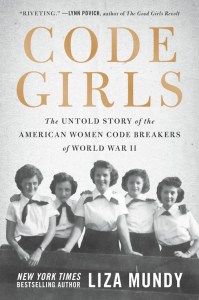 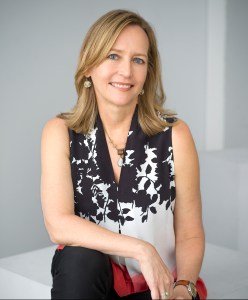 I love every part of the process. I love the sense of discovery that comes with researching and reporting. For Code Girls, I spent months at the National Archives, and each new cart they wheeled out, lined with gray boxes stuffed full of old rosters and records, was like Christmas Day. I loved talking to the women interviewed for this book, learning about what it was like to be a girl in America in the 1920s. I also enjoyed trying to understand the mechanics of code-breaking and trying to explain it for a general audience of readers.

I read a lot of thrillers and spy and crime novels. I just finished le Carre’s A Legacy of Spies</em<, and Michael Connelly’s The Late Show. I read every Laura Lippman and Louise Penny, and a lot of Scandinavian thrillers. I also have an addiction to the British naval seafaring novels of Patrick O’Brian. They strangely came in handy when writing about the U.S. Navy.

3. Do you have a designated writing space? What is your writing process?

My writing process is that I sit down in the chair and start to write. I try not to get up for several hours. I write in the smallest bedroom of our house, which was converted into an office. But I have to confess, I had so much research material for this book that it spilled over into both of my children’s bedrooms. The only consolation of being an empty-nester was that I could inhabit their space. They were away at college, and I would clean up before they came back, so, fortunately, they never knew how many books and papers were stacked in their rooms.

The women. Their lives, growing up. Why they went to college at a time when only 4 percent of American women did so. What their aspirations were. What the code-breaking course was like. Their time in Washington. What Washington was like. The work they did. The opportunity to contribute to the body of literature on what remains the worst conflict the globe has ever seen, and try to get this cohort of redoubtable women some long-overdue credit for their contribution.

5. How difficult was it to locate and interview the surviving Code Girls? Were any reluctant to discuss this part of their lives?

I worried about this, starting out — I knew that the women would be in their early 90s, if I could find them. I consulted a lot of rosters and put out a lot of letters and calls. It was hard because during the war, many women joined under their maiden names, and their names had changed since then, sometimes more than once. So locating their contact information based on rosters from the 1940s was a challenge, but in some cases, doable. The NSA also put me in touch with some families who had made inquiries about what their mothers did, and that email chain led me to a living codebreaker, Dot Braden Bruce. I also consulted alumnae records from colleges, some of whom, like Goucher and Wellesley, have begun to collect this information and recover this history. However, some of it was happenstance. One friend went to visit her mother at an assisted living facility in Maine, of all places and came back exclaiming that she had found not just one code-breaker, but three. And she did!

And you’re right, I did sometimes have to convince the women that after nearly 75 years, it is okay to talk. My sense was that they were still very respectful of their vow of secrecy — now lifted — but after all this time of having their work ignored, they were also eager to get some credit and have their contribution recognized. Understandably so.

6. What was one of the most surprising things you learned in your research?

The extent of the women’s contributions, even going back to the period before the war began. These women were not secretaries or assistants or ancillaries. They made major, major contributions to the course of the war and to the development of computers, code-breaking, and cybersecurity. And the extent to which history had ignored them; it made me angry.

This item is a preorder. Your payment method will be charged immediately, and the product is expected to ship on or around October 10, 2017. This date is subject to change due to shipping delays beyond our control.