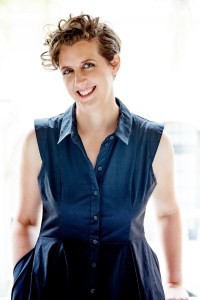 Amelia Westlake Was Never Here was inspired by a hoax that two friends and I invented in our final year of high school. Our aim was to amuse ourselves and, with any luck, our fellow classmates by creating an imaginary student called Amelia Westlake. We began small, putting Amelia’s name down on lists for sports teams, graffitiing it on school desks, and accepting birthday party invitations on her behalf. We waited to see if anyone noticed.

They noticed. It is safe to say our classmates became somewhat obsessed with finding out who Amelia Westlake was. We carried on pranking until the end of the year without anyone discovering the truth. Amelia Westlake donated prizes to Trivia Night, she sent postcards from exotic locations, she even entered a painting (depicting a giant question mark) in the final year art exhibition. Our hoax was the most fun thing I did in my entire school career, and every time I see Amelia Westlake’s name on the cover of my published book, I want to laugh out loud. It’s her best prank yet.

What became clear as I began writing her story, though, was that I wanted to convey more than just the fun my friends and I had that year. Amelia Westlake Was Never Here also provided an opportunity to explore serious topics like power and privilege, the disadvantages that young women particularly face, and how there are ways—often creative ones—in which young people can harness their talents and skills to challenge power. To find their voice.

When my friends and I were conducting our hoax, I hadn’t found my voice yet. I was an obedient teenager who studied hard and was trying her best to be interested in boys. I didn’t even know any lesbians, so the thought that I was a lesbian myself was inconceivable.

Except that it wasn’t inconceivable. Not really. Not to me. Just to everyone around me. What was inconceivable was that I would ever admit the truth.

In this respect, Harriet and Will, the two main characters in Amelia Westlake Was Never Here, have a better experience of high school than I did. They live in a world where they can be more open about their sexuality. But they still face hurdles on the road to equality—both as lesbians and as young women.

What Harriet and Will must learn is that they can stand up for themselves, that while in some respects they are disadvantaged, they have an immense amount of privilege, which they can harness not just for their own benefit, but for others who are less empowered.

In the novel, Amelia Westlake’s motto is “Play the Power, not the Game.” It is a call to arms to young people everywhere to challenge the structures around you; don’t comply with them. Stand up for yourself and others. Take action. Be creative. Be brave. And have yourself some fun along the way. 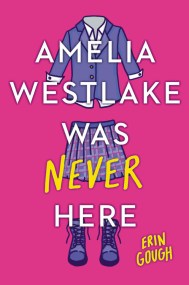 A fiercely funny, queer romantic comedy about two girls who can't stand each other, but join forces in a grand feminist plan to expose harassment and inequality at their elite private school.

Harriet Price is the perfect student: smart, dutiful, over-achieving. Will Everhart is a troublemaker who's never met an injustice she didn't fight. When their swim coach's inappropriate behavior is swept under the rug, the unlikely duo reluctantly team up to expose his misdeeds, pulling provocative pranks and creating the instantly legendary Amelia Westlake--an imaginary student who helps right the many wrongs of their privileged institution. But as tensions burn throughout their school--who is Amelia Westlake?--and between Harriet and Will, how long can they keep their secret? How far will they go to make a difference? And when will they realize they're falling for each other?

Award-winning author Erin Gough's Amelia Westlake Was Never Here is a funny, smart, and all-too-timely story of girls fighting back against power and privilege--and finding love while they're at it.