"A truly epic read full of intrigue and betrayal anchored in wonderful characters - some I loved and some I loathed, but all I wanted to know more about. Whether it's combat, politics or human interaction Karen Miller is on the money. Loved it."—John Gwynne on The Falcon Throne
"Well-constructed fantasy.... This is a dark fantasy that should appeal to fans of Game of Thrones."—RT Book Reviews on The Falcon Throne
"The story is complex and engrossing; fans of George R. R. Martin and Joe Abercrombie should particularly take note."—Publishers Weekly on The Falcon Throne
"Mammoth first installment packed with political intrigue and widescreen action."—Barnes & Noble Book Blog on The Falcon Throne
"Ms. Miller is wonderfully talented in building her worlds and in filling them with well-developed characters that are believable in their thoughts and actions."—Darquereviews.com on The Prodigal Mage
"Adventure, magic, friendship, love, and a battle of good versus evil -- I can see this tale becoming a classic."—Scifichick.com on The Awakened Mage
"A skillfully created world of ritual and tradition provides a stunning backdrop for her exciting adventures."—RT Book Reviews (Top Pick!) on Empress
Read More Read Less 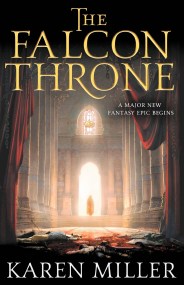