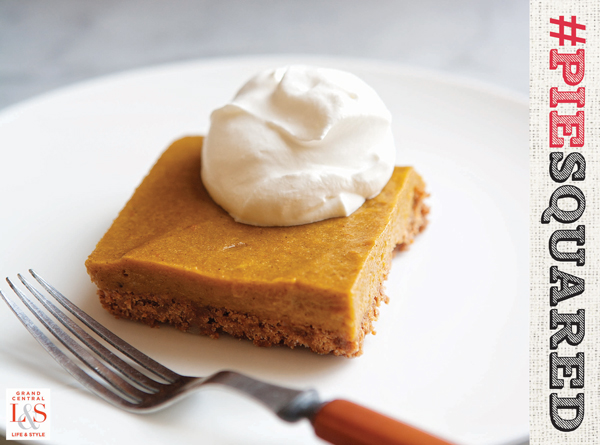 I’m going to admit something. I’m not a fan of most pumpkin pies. When faced with a table full of options, it’s the last slice I’ll put on my plate. However, this chiffon version changed my mind. It’s an airy wisp of a fluffy pie, laced with the sultry flavors of fall and a rich almond cookie crust. Gelatin is the key to the cloud-like texture of the filling. There are two critical junctures, so play close attention: First, when beating the egg whites, find the place where they are fluffy and high peaked, but moist, not dry. Dry whites will cause graininess in the finished pie. And next, when cooling the custard, don’t let it set up before folding in the egg whites or it will never combine; but don’t fold in the egg whites if the filling is still warm or their lift will disappear. It’s a tightrope walk. Check the heat of the custard on the inside of your wrist. If it still feels warm, it’s too warm.

Make Ahead: Plan for 4 hours or more to chill the pie before serving. The crust may be made a day or two in advance. The entire pie may be made 1 day in advance.

For the crust: Heat the oven to 350°F; if you have one, place a baking stone, Baking Steel, or inverted baking sheet on the center rack to heat.

In a large bowl, combine the amaretti crumbs, melted butter, and salt using a firm spatula and pressing the mixture against the side of the bowl until it is cohesive and the crumbs are thoroughly buttered. Dump the wet crumbs into the slab pie pan and press up the sides of the pan before filling in along the bottom. Take your time pressing the crust in, using the side of your hand or a metal measuring cup to form a good edge and a smooth base until the crust feels firm to the touch. Slide the pan into the oven (on top of the steel, stone, or baking sheet if using) and bake until lightly browned, about 20 minutes. Remove from the oven and cool.

For the filling: In a small bowl, sprinkle the gelatin over the cool water and let it absorb the water for about 5 minutes (this step is called blooming). Set up an ice bath with a large bowl filled with ice water. Place a medium saucepan half filled with water on the stove and heat until simmering. In a large heatproof bowl, whisk the pumpkin, brown sugar, egg yolks, cinnamon, vanilla, allspice, cloves, and salt until well combined and no streaks of yellow remain. Place the bowl over the simmering water. Cook the custard to 170ÅãF, stirring with a rubber spatula as it thickens, dries out a bit, and becomes smooth, 8 to 10 minutes. Remove the bowl from the heat and stir in the bloomed gelatin until it melts. Place the bowl over the ice bath and whisk as it cools to slightly warmer than room temperature, about 85ÅãF. To keep the custard from setting, remove the bowl from the ice bath while whipping the egg whites.

In the work bowl of a stand mixer fitted with the whip attachment or in a large bowl with a hand mixer, whip the egg whites on high until frothy. Add the cream of tartar (which makes the egg whites more stable) and continue whipping until the whites are shiny, the beater leaves a trail, and when lifted, forms medium peaks, another 3 or 4 minutes.

Stir one-third of the egg whites into the pumpkin custard until incorporated and the custard is lightened. Add the remaining egg

whites and, using a large, flat rubber spatula, gently fold the custard and egg whites together until thoroughly and carefully combined with no large white streaks, while not deflating the egg whites. Gently pour the mixture into the cooled crust, cover, and refrigerate until firm, about 4 hours.

For the topping: In the work bowl of a stand mixer, whip the cream, increasing the speed as soft peaks form, until it begins to thicken, adding the powdered sugar one spoonful at a time. Beat until the whisk leaves a trail in the stiffened cream and forms high peaks. Spoon the cream on top of the completely cooled chiffon. Make peaks with the back of a tablespoon, smooth the whipped cream from edge to edge with an offset spatula, or add a dollop to each serving. Refrigerate again for at least 2 hours. The pie is even better if it chills overnight and develops an even stronger autumnal flavor.

Note: This pie depends on uncooked egg whites for its lift, so choose the freshest eggs. If serving children, immune-compromised, or elderly guests, use pasteurized eggs instead. 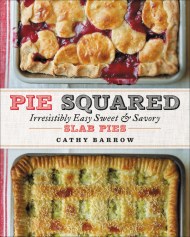 The delicious new food trend of slab pies that makes it easy to serve sweet or savory pastry to a crowd-or just your family!

For those of you who aren't up on your Pinterest food trends, slab pie is just like regular pie-only better (and bigger)! Instead of crimping and meticulously rolling out a round crust, slab pies are an unfussy twist that are perfect for a potluck or dinner party or just a family dinner. Baked on sheet pans, slab pies can easily serve a crowd of people dinner or dessert. Pie Squared includes seventy-five foolproof recipes, along with inventive decoration tips that will appeal to baking nerds and occasional bakers alike. And this fresh, uncomplicated take on pie will surely pique the interest of those who have previously been reluctant to take out their rolling pin.

Barrow didn't invent slab pie, but she definitely thinks outside of the crust. In addition to traditional pie dough, she offers more than a dozen crust recipes-from cracker crusts and cornbread crusts to cookie crusts and cheddar cheese crusts. Using these as a base, Barrow then entices readers with both savory and sweet slab pie creations, with recipes like Spinach, Gorgonzola, and Walnut Slab Pie and Curried Chicken Slab Pie to Sour Cream Peach Melba Slab Pie and Grande Mocha Cappuccino Slab Pie. The first book of its kind, this will appeal to lovers of easy food trends like sheet pan suppers and dump cakes. Don't be surprised when you start spying slab pies at your next potluck!