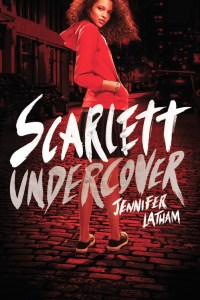 Meet Scarlett, a smart, sarcastic fifteen-year-old, ready to take on crime in her hometown. When Scarlett agrees to investigate a local boy’s suicide, she figures she’s in for an easy case and a quick buck. But it doesn’t take long for suicide to start looking a lot like murder.

As Scarlett finds herself deep in a world of cults, curses, and the seemingly supernatural, she discovers that her own family secrets may have more to do with the situation than she thinks…and that cracking the case could lead to solving her father’s murder.

Jennifer Latham delivers a compelling story and a character to remember in this one-of-a-kind debut novel.

“Sarcastic yet sensitive, Scarlett’s voice is what drives this narrative, which is one part snarky Veronica Mars in its noir-meets-adolescence setup and one part levelheaded Da Vinci Code with its religious symbolism–tinged quest… A fast read that includes all the familiar, expected trappings mystery and adventure fans love dressed up with fresh, diverse characters and settings.” — The Horn Book