This eye-opening book offers a “clear and captivating” scientific deep dive into how plants and animals have already unlocked the secret’s to immortality – and the lessons they hold for us all. Read ahead for Nicklas’s five fast facts about nature’s secrets to longevity.

1. Some animals can live a lot longer than humans.

For instance: the oldest Greenland sharks almost twice the age of the U.S. and we sometimes find dead bowhead whales with harpoon tops from the mid-1800’s. Beyond the realm of animals there are tress alive today which are older than the pyramids, such as 5,000 year old Metuselah in California. The giant root-network superorganism Pando in Utah is even older than that, dating from the end of the last Ice Age.

2. The weirdest aging pattern of all, though, is the immortal jellyfish Turritopsis.

When this jellyfish is stressed, it can revert from its adult stage back to something called the polyp stage. That would be akin to a butterfly turning into a caterpillar again or to a person being stressed out at work and reverting to being a kindergartener again.

They have hired many of the most talented American aging researchers, aiming to transfer the jellyfish rejuvenation mechanisms into people and other things. Other big companies like Google are also involved in the aging field through their company Calico (California Life Company).

4. Lots of commonly recommended supplements for longevity, like vitamin D and fish oil, don’t actually prolong life at all.

The same goes for multivitamins and antioxidant supplements have actually been shown to decrease lifespan while making some cancers more aggressive.

5. Scientists have developed “biological clocks” which can be used to predict how long someone has left to live and determine the age of different tissues.

Among other things we have learned that breast tissue ages faster than the rest of the body which might be the reason breast cancer is such a common form of cancer. 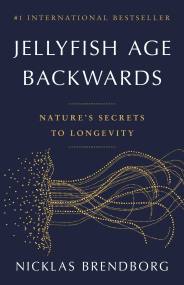 A Sunday Times (UK) Best Book of the Year • This eye-opening book offers a "clear and captivating" (Dr. Kris Verburgh​) scientific deep dive into how plants and animals have already unlocked the secrets to immortality–and the lessons they hold for us all.

Recent advances in medicine and technology have expanded our understanding of aging across the animal kingdom, and our own timeless quest for the fountain of youth. Yet, despite modern humans living longer today than ever before, the public’s understanding of what is possible is limited to our species—until now. In this spunky, effervescent debut, the key to immortality is revealed to be a superpower within reach. With mind-bending stories from the natural world and our own, Jellyfish Age Backwards reveals lifespans we cannot imagine and physiological gifts that feel closer to magic than reality:

Mixing cutting-edge research and stories from habitats all around the world, molecular biologist Nicklas Brendborg explores extended life cycles in all its varieties. Along the way, we meet a man who fasted for over a year; a woman who edited her own DNA; redwoods that survive thousands of years; and in the soil of Easter Island, the key to eternal youth. Jellyfish Age Backwards is a love letter to the immense power of nature, and what the immortal lives of many of earth's animals and plants can teach us about the secrets to longevity.

This item is a preorder. Your payment method will be charged immediately, and the product is expected to ship on or around January 17, 2023. This date is subject to change due to shipping delays beyond our control.