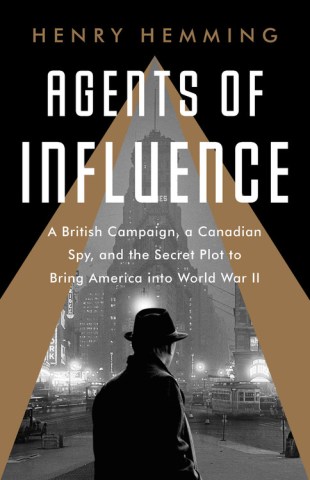 "This is a fast-paced yarn... reads like the film script of a 1940s thriller."—The Times (UK)
"Hemming is very much in control of his material. Bite-size chapters paint fascinating miniatures, often with a cliff-hanger to keep the pages turning... What more fertile ground could there be for a book than such an important premise, with modern resonance, explored through a tale of difficult odds, brilliant ruses, espionage and good old-fashioned detective work. In Hemming's sure hands, America's uncertain progress towards direct engagement in the second world war becomes riveting history."—The Spectator (UK)
"[A] page-turning spy thriller...Fluid, sharp writing, deep research, and a spy network with unparalleled ingenuity provide a snappy read and lots of shockers."—Kirkus Reviews (starred review)
"Agents of Influence is fun, delightful reading. Hemming provides a lucid narrative that draws on recently declassified documents and reads like an historical fiction. Hemming has a few books already under his belt, including Agent M: The Lives and Spies of MI5's Maxwell Knight, which documents his knack for bringing to life seemingly forgotten British spy history."—Cipher Brief
"A lucid, fast-paced account of England's secret scheme to draw America into WWII...This entertaining espionage history illuminates an important chapter in the history of foreign influence on American public opinion."—Publishers Weekly
"Gripping and intoxicating, it unfolds like the best screenplay."—Nicholas Shakespeare, author of The Dancer Upstairs
"A revelatory and wholly fascinating work of history. Superbly researched and written with gripping fluency, this lost secret of World War II espionage finally has its expert chronicler."—William Boyd
Read More Read Less