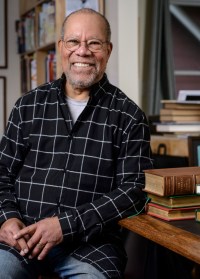 Little, Brown Books for Young Readers is saddened to announce the passing of Jerry Pinkney, one of the most heralded children’s book illustrators of all time. The illustrator of more than one hundred books, he had the rare distinction of being the recipient of five Caldecott Honors and the winner of the 2010 Caldecott Medal for The Lion and the Mouse. He died at age eighty-one after a brief non-Covid-related illness on Wednesday, October 20, 2021.

He found great success in retellings that featured animal characters and was the creator of such acclaimed works as The Tortoise & the Hare (2013) and 2020’s The Little Mermaid, which the New York Times Book Review called “lovingly rendered with rich detail.” At the time of his death, he was working on a memoir with his wife, minister and author Gloria Jean Pinkney, his high school sweetheart of sixty-four years, detailing his childhood struggling with a learning disability and his path to becoming an artist against the odds, to be published by Little, Brown Books for Young Readers.

“Jerry was a devoted husband, father, grandfather, and great-grandfather whose impact influenced the creative endeavors of so many in our family,” says Gloria Jean Pinkney.

Megan Tingley, Executive Vice President and Publisher, LBYR, said, “Jerry’s indefatigable attention to and love of his craft was unmatched, and he never stopped asking for his work to be pushed and challenged. Everyone he worked with was touched by his infectious delight in the act of creation, which never waned, and his generous spirit of kindness and collaboration.”

Andrea Spooner, VP, Editorial Director, LBYR, commented, “Jerry Pinkney was a true artistic legend of the children’s book industry for more than half a century, and it’s fair to say the industry today might look very different without his groundbreaking work. As someone who worked with Jerry for more than twenty-five years, I can say that every interaction with him was a meaningful one. He brought great joy, excellence, genuine personal connection, and dignity into every aspect of his work and being, and we will all miss him dearly.”

A native of Philadelphia, Jerry Pinkney studied at the Philadelphia College of Art (now the University of the Arts). He began illustrating children’s books in 1964 with The Adventures of Spider: West African Folktales, and was also the illustrator of the original iconic cover of Mildred Taylor’s Newbery Award–winning classic Roll of Thunder, Hear My Cry. He also illustrated the first eight Black History stamps for the US Postal Service, and served on the  Citizens’ Stamp Advisory Committee. He was a member of the National Endowment for the Arts, was the first children’s book illustrator elected to the American Academy of Arts and Sciences, was elected into the Society of Illustrators Hall of Fame, and was the most exhibited illustrator in American museums.

In advice for children, Jerry Pinkney said, “For the young person who is struggling in school, never forget there are many different ways to learn. Be curious. Do not be afraid to try. Do not be disappointed when making mistakes. You will discover your own unique way of understanding the things being taught. Learn from mistakes. Everything that happens to you will frame who you are, and who you will become. Your path to success will follow.”

Jerry Pinkney is survived by his wife of sixty-one years, as well as by his daughter, Troy, and his three sons, Brian, Scott, and Myles Pinkney, all artists, and nine living grandchildren and three great-grandchildren.

In lieu of flowers, please donate to the Dyslexia Foundation (dyslexiafoundation.org) or the Teatown Lake Reservation Preserve and Education Center (teatown.org).