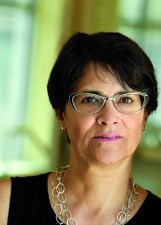 Basic Books, an imprint of Perseus Books, a Hachette Book Group company, announced today that it has acquired four new books by award-winning historian Martha S. Jones, the author of Vanguard: How Black Women Broke Barriers, Won the Vote, and Insisted on Equality for All (Basic Books, 2020).

Jones’s next book offers a profound and powerful reassessment of racial identity in the United States by centering the history of slavery’s sexual violence and its legacies. Braiding history and memoir, Jones grapples with her own family’s story across five generations and two hundred years–not only as the child of a white mother and a Black father, but also as the great-great granddaughter of a Black woman named Isabella Holley and the white man who enslaved and raped her. Lyrical and deeply personal, the book reckons with what it means to be marked by and to bear the legacy of sexual violence. In the process, it will transform how we understand Black biracial and mixed-race identities, colorism and so-called light skin, “passing,” and the very idea of race itself.

Subsequent books include a manifesto on the role of history in America’s ongoing racial reckoning; a family history that provides a major new account of the Black women’s Atlantic world out from the Haitian Revolution and across the nineteenth century; and a landmark new biography of U.S. Chief Justice Roger B. Taney that emphasizes his consequential relationships with Black Americans across his lifetime.

Brian J. Distelberg, editorial director for history and social sciences at Basic Books, said, “It’s been an enormous honor to work with Martha Jones, a writer of great sensitivity and one of the best and most intellectually innovative historians working today. I’m tremendously excited about Basic’s long-term commitment to Martha and to these books. Each of them promises to make a major impact on how we understand the world, and together, they advance a project that could not be more urgent: dismantling the myths that so profoundly distort our history. I’m delighted that we’ll be publishing Martha and her books for many years to come.”

About the Author:
Martha S. Jones is the Society of Black Alumni Presidential Professor, professor of history, and Professor at the SNF Agora Institute at Johns Hopkins University. She is the author of Vanguard, which was the winner of the 2021 Los Angeles Times Book Prize in History, a finalist for the 2021 Mark Lynton History Prize, a shortlist selection for the 2021 MAAH Stone Book Award, a longlist selection for the 2021 Cundill History Prize, and was named a best book of 2020 by Time, Foreign Affairs, Ms., Black Perspectives, Undefeated, and Smithsonian. She is also the author of Birthright Citizens, which was the winner of numerous prizes, and All Bound up Together. She has written for The New York Times, The Washington Post, The Atlantic, USA Today, and more. She is an immediate past co-president of the Berkshire Conference of Women Historians, and today serves on the boards of the Society of American Historians, the National Women’s History Museum, the US Capitol Historical Society, the Johns Hopkins University Press, the Journal of African American History and Slavery & Abolition. She lives in Baltimore, MD.