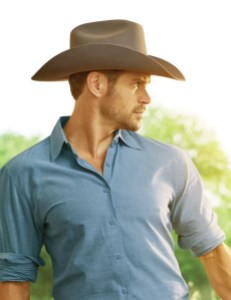 If your best friends had to pick four words to describe you, what would they pick? Funny, honorable (I live by the cowboy code of honor), single and maybe a little impatient.

What are three things you enjoy doing in your free time? I love country music, riding broncs and spending time with my family. I have a sister, Kasey, who has three amazing kids and I have a brother, Brody, who got married last year. He and his wife are expecting their first child. Family is the most important thing in the world to me.

What’s the last song you listened to? Tennessee Whiskey by Chris Stapleton

If you could go back in time and change one thing in your life, what would it be? I would have married Carlene right out of high school.

What are you looking for in an ideal mate? I want someone who is sassy who’ll state her opinion like Carlene does and who makes my heart flutter (I know that sounds kind of sissy but it’s the truth). I’d never go for someone who wouldn’t stand up to me when she thinks she right or fall for someone on nothing but her looks. Carlene is beautiful inside and out and I want someone like her when I settle down. 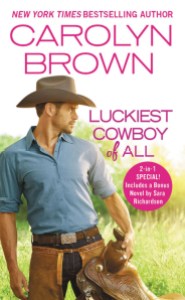 Jace’s heart was still as big and kind as it had been in high school. He’d been witty and charming as a friend and then an amazing boyfriend. And they were so hot together, they’d barely been able to keep their hands to themselves. But it had been that sweetness about his heart that had drawn Carlene to him from the beginning and made her long for him years afterward.

As she crossed the living room to the door to show him out, she stepped on a few bits of dead needles from the dried-up Christmas tree her aunt had left in the corner. “Ouch!”

“Here, let me help you.” Jace knelt beside her and gently removed the dried debris from her foot.

His touch sent delicious shivers all the way to her scalp, just like it used to. If he reached up and traced her jaw line with his forefinger, she’d be ready to drag him off to the hay loft all over again.

“There now.” He rose to his feet. “Want me to help you get rid of this thing? I can haul it out of here as it stands.”

“No thanks. I’ll want to keep several of her ornaments, so I’ll take care of it later.”

Jace headed for the door and stopped in the middle of the floor. “You ever get married?”

“I’m still holding on as the most eligible bachelor in the panhandle,” he grinned.

“With that much power, surely you could sweet talk the rodeo folks into selling me this house,” she said.

“Hey, look what I found in our moving boxes.” Tilly burst into the living room, but stopped short at the sight of Jace. “Who are you?”

Her hair was all tucked up under a stocking cap with the Florida Gators logo on the front and big green sunglasses covered half her face.

“I’m Jace Dawson. And you are?” He stuck out his hand.

She shook his hand. “I’m Tilly Rose Varner. Look what else I found.” She turned around to face Carlene and held out an official stuffed alligator from the Florida football team. “I haven’t seen him in a whole year. I guess Aunt Bee packed him for me.”

“She probably found him under your bed,” Carlene said. “Surely you aren’t finished unpacking yet.”

“Nope, but I’m hungry. I’m going to make a peanut butter and jelly sandwich. You want one?” She laid the stuffed animal on the sofa and started toward the kitchen.

“No, I’m her daughter.” Tilly giggled as she whipped off the stocking hat and a cascade of curly red hair fell to her shoulders.

An icy chill chased up Jace’s backbone. “How old are you, Tilly Rose Varner?”

“I’ll be nine on February twenty-fourth.” She removed the oversized sunglasses and looked up at him with gray eyes sprinkled with gold flecks. Eyes that were exactly like his.

Suddenly, there was not a single doubt in his mind that Jace Dawson was staring at his daughter.

Find out more in an exclusive interview with Carolyn Brown at Rainy Day Ramblings.