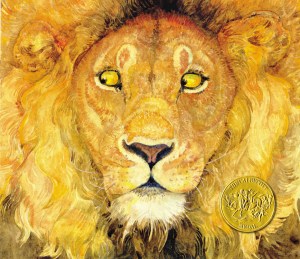 The Lion & The Mouse

In award-winning artist Jerry Pinkney’s wordless adaptation of one of Aesop’s most beloved fables, an unlikely pair learn that no act of kindness is ever wasted. After a ferocious lion spares a cowering mouse that he’d planned to eat, the mouse later comes to his rescue, freeing him from a poacher’s trap. With vivid depictions of the landscape of the African Serengeti and expressively-drawn characters, Pinkney makes this a truly special retelling, and his stunning pictures speak volumes.

Winner of the 2010 Randolph Caldecott Medal

★ “Pinkney’s soft, multihued strokes make everything in the jungle seem alive, right down to the rock.” –Booklist

★ “A classic tale from a consummate artist.” –School Library Journal

★ “A nearly wordless exploration of Aesop’s fable of symbiotic mercy that is nothing short of masterful.” –Kirkus

★ “Pinkney has no need of words; his art speaks eloquently for itself.” –Publishers Weekly