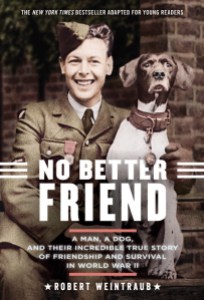 A Man, a Dog, and Their Incredible True Story of Friendship and Survival in World War II

A middle-grade edition of the New York Times bestselling No Better Friend-the extraordinary tale of friendship and survival in World War II.

No Better Friend tells the incredible true story of Frank Williams, a radarman in Britain’s Royal Air Force, and Judy, a purebred pointer, who met as prisoners of war during World War II. Judy, who became the war’s only official canine POW, was a fiercely loyal dog who sensed danger-warning her fellow prisoners of imminent attacks and, later, protecting them from brutal beatings. Frank and Judy’s friendship, an unbreakable bond forged in the worst circumstances, is one of the great recently uncovered stories of World War II.

As they discover Frank and Judy’s story in this specially adapted text, young readers will also learn about key World War II moments through informative and engaging sidebars, maps, photographs, and a timeline.

“An enormously readable account of animal and human companionship and survival; recommended for budding historians and fans of survival stories.” —School Library Journal