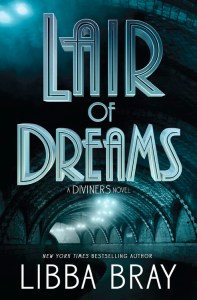 After a supernatural showdown with a serial killer, Evie O’Neill has outed herself as a Diviner. Now that the world knows of her ability to “read” objects, and therefore, read the past, she has become a media darling, earning the title, “America’s Sweetheart Seer.” But not everyone is so accepting of the Diviners’ abilities…

Meanwhile, mysterious deaths have been turning up in the city, victims of an unknown sleeping sickness. Can the Diviners descend into the dreamworld and catch a killer?

★ “The ambitiously broad focus of this novel strikes just the right balance in its division of narrative might, developing each of the dizzyingly large cast of diverse characters with an impressive attention to detail and with period-specific, witty dialogue. Weaving together a chilling mystery with a truly elusive solution, several poignant love stories, agonizing injustice, terrifyingly monstrous dreams, and even a cameo by legendary psychiatrist Carl Jung, this installment wraps enough up to satisfy but clearly sets the stage for more. How will readers stand the wait?” — Kirkus Reviews, starred review

★ “This breathtaking sequel to The Diviners is worth the wait…  A multilayered, character-driven, and richly rewarding installment to the paranormal historical fiction series.” — School Library Journal, starred review

★ “Bray tantalizes the reader, unraveling plot twists and secrets until the final hair-raising conclusion…  The story is written in flowing phrases with detailed descriptions that add depth and clarity to both the book’s setting and characters. Bray weaves connections between her numerous characters and explores friendships, dark secrets, and dramatic love interests. This book will fly off the shelves to fans of Bray, Cassandra Clare, and the supernatural.” — Voices of Youth Advocates, starred review