Praise for The Once and Future Geek:
"A highly imaginative twist on the legend of King Arthur, complete with time travel, programming, and fierce friendships, the Camelot Code is the perfect pick for tweens who love medieval lore and geek culture in equal measure!"—Christina Soontornvat, author of The Changelings series
"Arthurian legends just leveled up in this hilariously geeky, modern, and clever take on The Sword in the Stone. A Connecticut Yankee in King Arthur's Court meets Ready Player One for the middle-grade set."—Julie Leung, author of The Mice of the Round Table series
"Boys and girls will ditch their video games and be sucked into the delightful world of (future) King Arthur and his unlikely saviors, Sophie and Stu. An absolute delight!"—Jen Calonita, author of the Fairy Tale Reform School series
"Imagine The Sword in the Stone with a dash of Freaky Friday and a pinch of World of Warcraft--this funny, fast-paced adventure is chicken soup for the geek's soul."—Zack Clark and Nick Eliopulos, authors of The Adventurers Guild series
"A wholesome, modern twist on the classic legend that could provide a gateway for newer readers and fun for the gaming set."—Kirkus Reviews
"Cinematic and epic in scale. . . . A delightfully unexpected amount of detail from Arthurian lore. . . . Fast-paced, downright fun novel."—Booklist
"Dashes of romance, bullying, social anxiety, family stresses, commentary on middle school social structure, and bits of history and Arthurian lore all combine to create a though-provoking adventure story. . . . Blending elements of several genres, this story will be appealing to many different types of readers."
—School Library Journal
"Impeccably incorporates contemporary and video-game elements into the original King Arthur story, creating an enjoyable and seamless narrative."—Publishers Weekly
Read More Read Less 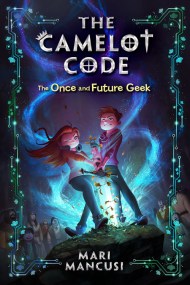