"Full of invention and ingenuity . . . Great fun."—SFX
"Launches a witty adventure series . . . Readers will appreciate the infusion of humor and fun-loving characters into this vivid and sometimes grim fantasy world."—Publishers Weekly
"As with most of Parker's work, there is a mel­ancholy undercurrent that gives the humor weight. As heroes go, Orhan is a reluctant and flawed one . . . . [but] when Orhan works the problem, we can't help but watch."—Locus
"Parker's acerbic wit and knowledge of human nature are a delight to read as he explores the way conflict is guided, in equal measure, by the brilliance and unerring foolishness of humanity . . . . Thoroughly engaging."—RT Books Reviews on The Two of Swords: Volume One
"[Sharps] is a ripping good adventure yarn, laced with frequent barbed witticisms and ace sword fighting... Parker's settings and characterizations never miss a beat, and the intricate political interplay of intrigue is suspenseful almost to the last page."—Publishers Weekly on Sharps
"This is another splendid offering from K.J. Parker, the (pseudonymous) British fantasist who seems incapable of writing in anything but top form."—Locus on Sharps
"Well-crafted, powerful and downright unmissable"—SFX on The Company
"Brilliant."—Locus on The Engineer Trilogy
"Parker carries the reader on a headlong gallop to the powerful conclusion."—Publishers Weekly on The Company (starred review)
"Skillful plotting and rich scene-setting."—Guardian on The Company
"A richly textured and emotionally complex fantasy...Highly recommended."—Library Journal on The Engineer Trilogy (starred review)
"Astonishingly good."—RT Book Reviews on Sharps
"Parker's skillful control of pacing, expert rendering of characters, and subtle sense of humor add depth and believability."—Library Journal on Sharps
"An intriguing tale of magic, manipulation and revenge . . . An action-packed adventure."—Starburst on the Fencer trilogy
Read More Read Less 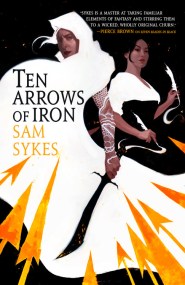