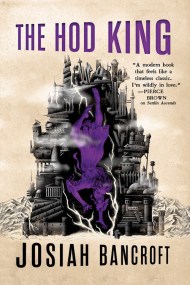 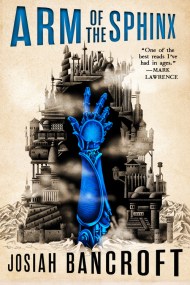 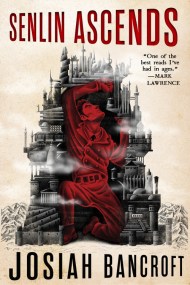 "It's rare to find a modern book that feels like a timeless classic. I'm wildly in love with this book."—Pierce Brown, author of Red Rising and Iron Gold
"Josiah Bancroft is a magician. His books are that rare alchemy: gracefully written, deliriously imaginative, action-packed, warm, witty, and thought-provoking. I can't wait for more."—Madeline Miller, New York Times bestselling author of Circe
"Senlin Ascends is one of the best reads I've had in ages . . . I was dragged in and didn't escape until I'd finished two or three days later."—Mark Lawrence, author of Prince of Thorns
"Wonderfully unique and superbly well written. I loved every page."—Nicholas Eames, author of Kings of the Wyld
"The "Books of Babel" are something you hope to see perhaps once a decade - future classics, which may be remembered long after the series concludes."—Los Angeles Times on The Hod King
"Senlin is a man worth rooting for, and his strengthening resolve and character is as marvelous and sprawling as the tower he climbs."—The Washington Post
"What is remarkable about this novel, quite apart from its rich, allusive prose, is Bancroft's portrayal of Senlin, a good man in a desperate situation, and the way he changes in response to his experiences in his ascent."—The Guardian
"Senlin Ascends crosses the everyday strangeness and lyrical prose of Borges and Gogol with all the action and adventure of high fantasy. I loved it, and grabbed the next one as soon as I turned the last page."—Django Wexler, author of The Thousand Names
"With deceptive simplicity Bancroft brings this gothic place and its denizens to a colourful life...I loved it!"—Adrian Selby, author of Snakewood
"Senlin Ascends is an adventure rife with character, voice and beauty-a well-polished knife drawn out slowly."—Sam Sykes, author of The City Stained Red
"Senlin Ascends is a unique masterpiece. A brilliant debut. Highly recommended!"—Michael R. Fletcher, author of Beyond Redemption
"Ticks along with the tight precision and artistry of a well-wound watch."—Kirkus
"This is fantasy storytelling of a high order."—The Toronto Star
"More than deserving of advance buzz and initial self-published success, Josiah Bancroft's Senlin Ascends is an early contender for year-end best lists, and a towering achievement in weird fantasy."—B&N Sci-Fi & Fantasy Blog
"Brilliant debut fantasy . . . This novel goes off like a firework and suggests even greater things in the author's future."—Publishers Weekly, starred review
"This is an exceedingly rich book. A depth of imagination married with a poetic turn of phrase and an engaging cast of characters conspire to deliver an epic story soaring high above the clouds."
—Fantasy Faction
"Like a blend of Kafka's The Castle and Mervyn Peake's Gormenghast, Josiah Bancroft's ambitious first chapter in his The Books of Babel series is an impressive display of imagination and humor."—SciFiNow
Read More Read Less