Forest-rimmed, hilly, and as wild as an interstate ever gets, I-90 follows the Clark Fork and St. Regis Rivers most of the way between the Idaho border and Missoula. From the state line east to Frenchtown, just west of Missoula, I-90 follows the Mullan Road, built by John Mullan and his crew in the 1860s as a military road from Fort Benton to Walla Walla, Washington.

The Idaho-Montana border straddles the crest of the Bitterroot Mountains at the 4,710-feet-high Lookout Pass (I-90 exit 0), where the Lookout Pass Ski Resort offers skiing in winter and in summer serves as an outfitter for bicyclists taking the Hiawatha Mountain Bike Trail.

Continuing east into Montana, pull off I-90 at Haugan (exit 16) to visit the Savenac Historic Site, a tree nursery started along the Mullan Road in 1909. A year later a three-million-acre fire destroyed the new nursery and much else. After the fire, forest rangers stole pine cones from squirrel caches (replacing them with nuts) and replanted the pine seeds. The nursery eventually flourished, providing seedlings to reforest national forests all over the West.

St. Regis, at exit 34, is where the St. Regis River flows into the Clark Fork (like De Borgia to the west, St. Regis was named for the Jesuit missionary St. Regis De Borgia). After the rivers join, the Clark Fork turns sharply to the north. Highway 135 follows it along 20 miles of lovely river-scapes to Highway 200 near village of Paradise.

Superior, at exit 47, was a mining boomtown. Gold was discovered on a stream called Cayuse Creek in 1869, and over the next year, 10,000 people swarmed to the mining camp. In some areas, such as the now ghost town of Louisville, Chinese miners moved into the abandoned shacks and gleaned the remaining gold. Mining booms came intermittently over the next few decades but pretty much ended in 1910, when a huge forest fire destroyed the Keystone Mine and most everything else for miles around.

Alberton, at exit 75, is alongside a notorious gorge in the Clark Fork River and was originally a railroad town. It was a division point for the Milwaukee Road, whose depot has been restored and is visible from I-90.

Frenchtown, at exit 89 and just 15 miles from Missoula, was settled by French Canadians as the Mullan Road was being built. It’s a former mill town and now a bedroom community of Missoula.

A rails-to-trails project converted 15 miles of Chicago, Milwaukee, and St. Paul Railroad track, tunnel, and trestle into the exhilarating Hiawatha Mountain Bike Trail (208/744-1301, late May–early Oct., trail pass $9 adults, $6 children 6–13, free under 6). The centerpiece of the trail is the 8,771-foot Taft Tunnel, built in 1909 and cut through solid rock from the Montana side of Lookout Pass (the East Portal) through to Idaho (the West Portal). After emerging in Idaho, the track winds down through another eight tunnels and over nine wooden trestles before reaching the valley floor at the village of Pearson.

Bikers need headlights to traverse the trail, and hikers will want to bring along strong flashlights. Be prepared to get a little wet and chilly in the tunnel. Even though the grade never exceeds 1.7 percent, vertigo-inducing trestles stand along sheer cliffs and over steep rocky canyons. Whether you’re on foot or on a bike, you’ll have your heart in your mouth on several occasions.

To reach the beginning of the trail and Taft Tunnel, take exit 5 (Taft Area) from I-90. Turn south and follow Rainy Creek Road for two miles, and take the road toward East Portal at the Y junction. The parking area is immediately ahead, and just beyond is the gate to the tunnel.

A shuttle service ferries cyclists from the trail’s end at Pearson back up to the West Portal (both on the Idaho side). From here, you traverse the Taft Tunnel once again to return to the car park at the East Portal. Plan a full day for this trip, and reserve a spot on the shuttle in advance by calling the Lookout Pass Ski Area (208/744-1301, $9 adults, $6 children). Mountain bike rentals are available at the ski area (exit 0 from I-90) for $29–34; you can also rent a tagalong bike or a trailer for kids.

Recreation at Lookout Pass, on the Montana-Idaho border, turns from biking to skiing in the winter, when an average of 400 inches of generally powdery snow falls at the ski area here (208/744-1301). Lookout has a small downhill ski area (with free lessons for kids!) and good cross-country trails. Weekend adult lift tickets cost $37 for a full day, $32 after 12:30 p.m.; midweek the rates drop by $3. Many special rates are available for seniors, college students, military, and juniors; kids under six are free.

Alberton Gorge (or Cyr Canyon) is a 20-mile stretch of white water on the Clark Fork River. There are plenty of fishing-access sites along the Clark Fork that can be used to put in and take out boats. It’s an especially challenging run when the river is high; only experienced paddlers should attempt it before August. Even when the water level drops, it’s not a trip for beginners, although Missoula-based Lewis and Clark Trail Adventures (406/728-7609 or 800/366-6246, half-day trip $55 adults, $45 children; full day with lunch $75 adults, $60 children) runs regular raft trips through Alberton Gorge. This outfitter also offers other rafting and hiking trips along the Lewis and Clark Trail; see the website for details. Another good rafting tour operator is 10,000 Waves (406/549-6670 or 800/537-8315, half-day trip $70 adults, $50 children 5–12; full day $85 adults, $65 children); both trips include lunch. In addition to trips through Alberton Gorge, 10,000 Waves offers guided raft and kayak trips along the Blackfoot River and through Missoula’s Hell Gate Canyon.

Those who aren’t tempted by the white water may choose to fish this section of the Clark Fork for brown, cutthroat, rainbow, and bull trout.

Most eastbound I-90 travelers press on to Missoula once they cross into the state, but there are several quite passable lodgings along the interstate.

Down the road from Lookout, there is a string of small towns with (mostly) small unremarkable motels. You’ll know the town of Haugan is coming well in advance from the many billboards heralding the World Famous 50,000 Silver Dollar Bar complex with its busy bar, casino, gift shop, and restaurant. Also part of the complex is the Silver Inn (exit 16, 406/678-4242 or 800/531-1968, $75 and up) with simple, clean rooms.

Several Lolo National Forest campgrounds are convenient to I-90. Cabin City Forest Service campground (Memorial Day–Labor Day, $7) is a little more than two miles off I-90 at exit 22, just east of De Borgia. Unless you hit a busy weekend, it’s relatively peaceful. The campsites are set in a lodgepole pine forest, and there’s a 0.75-mile nature hike down to Twelvemile Creek. 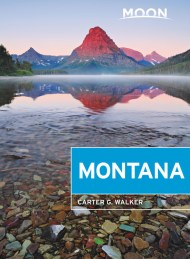