For many first-time visitors, the essence of Cambodian food might not be obvious, or if it is, the thought of partaking in typical Cambodian cuisine might not appear to be an altogether attractive option. After all, Cambodia’s staple diet consists of prahoc, a strong-smelling fermented fish paste, and rice.

Rice (bai) is the most important food in the country, and more than 2,000 species once grew in Cambodia. There’s hardly a dish that does not contain rice, including noodles made from rice, desserts, cakes, and alcoholic beverages, and no Khmer meal is complete without boiled rice. Also central to Khmer cooking is fish, from lakes, rivers, and the Gulf of Thailand. Fish is smoked, fried, boiled, grilled, fermented, or served in soup.

Perhaps even more important, especially for the country’s poor, who can’t afford fish or meat, is prahoc, which serves as a condiment to every Cambodian meal. But there’s plenty of variety to be discovered beyond prahoc, which the uninitiated should perhaps first try in a restaurant before indulging in the market variety. Soups and fried dishes with fish, meat, and vegetables are an integral part of Cambodia’s staple food, and fruit is amazingly abundant and varied. Chou Ta-Kuan, a Chinese diplomat who spent almost a year in Angkor during the late 13th century, reported the consumption of vegetables like mustard greens, cucumbers, squashes, leeks, eggplants, and onions, and fruit such as watermelons, oranges, lychees, pomegranates, lotus roots, and bananas. All are still common in Cambodia today.

Cambodia’s cuisine is not unlike that of its two larger neighbors, Thailand and Vietnam, and many dishes available in those countries are also Cambodian standards, although local flavors vary. The Cambodians are not nearly as obsessed with chili as the Thais and aim for milder, more rounded flavors infused with herbs, pepper, and sugar. Tamarind is used in soups and sauces, and turmeric, ginger, lemongrass, kaffir lime, and galangal are integral building blocks of many Khmer dishes. Kroeng, a typical Khmer sauce, contains cardamom, cinnamon, nutmeg, cloves, and star anise as well as the aforementioned ingredients. As recently as a decade ago, Cambodians cooked a great deal with marijuana, until Western pressure removed the evil weed from market stalls.

The closer you get to the border with Thailand, the more Thai dishes appear on local menus, and the same goes for the country’s border with Vietnam. In a larger international context, Cambodia lies, geographically and culturally, between India and China, and this is reflected in its kitchen—think curry (with coconut milk) and spring rolls, both integral dishes to any local menu, done in Cambodian style, of course. The French presence in the country has also left its culinary legacy: No other Southeast Asian nation consumes as much bread, mostly the traditional French baguette, sold fresh in the morning on busy street corners. Sandwiches filled with pickled vegetables and pâté are served from roadside stalls.

At home, families usually sit in a circle on a mat on the floor to eat. Cambodians eat mostly with chopsticks. For breakfast, noodle soup with vegetables and meat is a favorite. In the countryside, there’s little else to eat in the morning. For lunch and dinner, most Cambodians try to eat at home. A usual meal consists of boiled rice along with soup (samlor), prahoc, and fried fish or meat as well as unripe papaya or mango.

Street stalls usually set up in Cambodian towns in the afternoon, often around the market or by a bridge, serving a variety of fried dishes, sandwiches, sugarcane juice, and some very sweet fruit desserts. Small-town restaurants usually have no menu and display the available precooked meals in large pots. Just point at the desired dish and it will be served with rice.

In recent years, thanks to tourism, a wide variety of international cuisine, sometimes awful, sometimes splendid, has become available in Phnom Penh and Siem Reap. Sometimes it’s even found in some provincial capitals, but on the whole, once you are in the provinces, you are likely to have to stick to Cambodian staples. Also note that international food is significantly more expensive than the local fare. 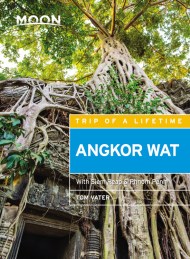 The ancient temples at Angkor Wat are unlike anything else on earth. Step back in time and take the trip of a lifetime with Moon Travel Guides.

This item is a preorder. Your payment method will be charged immediately, and the product is expected to ship on or around October 2, 2018. This date is subject to change due to shipping delays beyond our control.