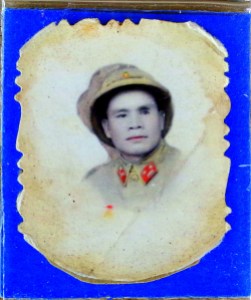 On my desk, between a picture of my grandmother and a small, 19th century Mongolian Protector Demon, I have a postage-stamp-sized photo of a young North Vietnamese first lieutenant in dress khakis and a pith helmet. It was obviously taken in a studio, just his head and the slope of his shoulders. He is posing for the photographer, looking slightly to the right of the camera, stern and determined, as if he’d just seen the future over the photographer’s shoulder. His shadow on the white background is a ghost figure behind him. The photo is finely detailed and carefully hand-tinted—the red and gold shoulder tabs of a first lieutenant, a tiny red star on his helmet, his cheeks and lips blushed, eyes and eyebrows darkened.

I killed him with a hand grenade when I was twenty three years old. I’ll never know how many others I killed because most of them were slaughtered by gunships or tactical air that I called in, or artillery fire I directed down on their positions, then counted bodies afterwards. Firefights, even as close as 20 or 30 yards, mostly involved firing through brush or head-high grass, our red tracers going in and their green tracers flashing out past us with tiny sonic booms, snapsnapsnap, faster than thought. When it was over, maybe a few of ours were dead or wounded and some of theirs were dead or soon would be. Very few soldiers actually saw an enemy, aimed at him, fired, and watched him fall and die.

The young lieutenant was low-crawling through knee-high golden yellow grass toward the B-52 bomb crater where I had been heating up a canteen cup of Bugs Bunny Kool Aid. One of the five Bru Montagnard mercenaries with me saw him first, and pointed him out. I threw the grenade and saw it explode, his prone body rising with the flame black smoke, dust and grass. For a long moment he was suspended, his bones and joints bent in crazy directions, before he fell back dead and his men began shooting at us.

We held them off with rifle fire and grenades, managing to keep them from getting close enough to lob their grenades into our bomb crater. We might have been lucky enough to toss back one or two before they exploded, but more than that we’d have been finished, the walls of the crater we were in the blast and shrapnel I got on the radio and discovered—dumb good luck—that a pair of cobras gunships was only five minutes away.

When the cobras finished I thanked them for saving our asses, and we went among the dead and wounded and dying, shooting them all. My Montagnard squad leader took a round in his stomach, through his belt buckle, by one of the wounded, before I killed him. We shot the NVA some more until we were sure they were finally all dead, and I medivaced the squad leader, carrying him through yellow marker smoke to the shuddering chopper, having tagged him as one of our CIDG troops so they’d take him to an American base hospital.

It was when we were going through the pockets and packs of the dead, dismembered NVA, that I found the photo. I looked at the young Lieutenant’s face, at the photo, then back at him. I had to look quickly because the gray faces of the dead begin to look all the same, the skin going slack, their faces losing the wrinkles and creases from smiling and frowning and squinting at the sun. Their open eyes are dead too, giving away nothing. But it was him, the one I’d killed with the grenade before the gunships worked over what was left.

His photo was in a little red plastic disk, the sort of locket you’d send your wife or sweetheart. Maybe that’s what he’d planned to do with it. Or maybe he didn’t have a girl yet, or anymore, and was saving it until he did. Maybe he had a crush on some Vietnamese girl back wherever he had once lived and was too shy, afraid of looking like a fool, to send it to her. Maybe he wanted to give it to his parents. But it was me—who knows why—who got it.

He had been trying to kill me and If I hadn’t seen him when I did he probably would have. There was no justice, or logic, or morality involved. Luck maybe, whatever that is, or fate. What was I doing 12,000 miles from home, in that bomb crater, on that afternoon? What was he doing there, my doomed twin?

Maybe, I don’t know, through all the years when we were growing up on opposite sides of the earth, we were fated to meet, him to die and me to kill him then take his picture home with me and look at it every day for forty years. Some days I wonder if I’ve been living his life too, all along, since the day we were born.