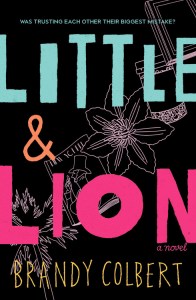 I was having dinner with my cousin last year when she asked what my book Little & Lion is about. I gave a disjointed pitch, but she said it sounded interesting and circled back to my description of the main character, Suzette.

“Black, bisexual, and Jewish?” she asked.

I waited for her to question my choice to write about a character that represented several marginalizations. She never did.

“Cool,” she said. “My cousin on the other side of my family is black, lesbian, and Jewish. I’ll tell her to check it out.”

My eyes widened immediately. I knew that although my Suzette was fictional, more than a few people had to share her specific collection of identities in the real world. But I never expected to be so closely connected to someone who could “validate” the inclusiveness of my book.
I didn’t set out to write a highly diverse novel, which is how Little & Lion is often described. My only goal was to depict the Los Angeles that I live in and that very much exists.

I’ve talked a lot about how I grew up in a Midwestern town with a very small black population; there weren’t many people who looked like me, and especially not at the schools I attended. But I also craved meeting people from different cultures and ethnicities. I wanted to learn what it meant to have brown skin but not be black. I wanted to meet people who were part of the LGBTQ community, because by the time I was in high school, I’d met only one gay person—an adult man—who was out in my hometown, and I knew that number, even in a city as small as ours, was abysmal.

I grew up in a Baptist church, and I can’t remember when I first realized there were other religions, but I was instantly fascinated. Almost everyone I’d ever known had been Christian. My hometown has an overwhelming number of churches; on a recent visit, I counted about four within a two-block radius, and that’s not uncommon. I wanted to know about other religions and what millions of people around the world believed, even if it wasn’t reflected where I grew up. I finally took a Judaism class after high school, which was one of the most interesting courses in my college career, by far. It was taught by a woman, the rabbi at the only synagogue in town.

Moving to Los Angeles after college, I was astounded by how different it was from my hometown. People wore what they wanted and their outfits didn’t all look the same. They had varying shades of brown skin and diverse backgrounds to go with them. They spoke multiple languages and observed various religions—or, sometimes, they practiced nothing at all. They were gay and lesbian and bisexual and transgender and queer. They talked openly about their physical disabilities and mental illness. Sometimes one person claimed several of these identities at once.
I was surprised, and tremendously pleased. I’d lived for twenty-two years in a place where I was often ridiculed and judged for the color of my skin, and now there were so many people with identities that weren’t white and Christian and straight and able-bodied living and working among me. Los Angeles is the sort of city that celebrates the diversity of its inhabitants with neighborhoods like Chinatown and Little Ethiopia and West Hollywood and Boyle Heights, and I finally felt like I was home.

Sometimes people seem taken aback by a character that is Jewish, black, and bisexual, or a black and Korean-American boy who wears hearing aids, or a pansexual Latina. And some people are especially troubled by the fact that these identities can all exist in one novel. They believe that exploring these intersections is trying too hard to be politically correct, or that it’s just a tad too much diversity for one story. And I believe that to be insulting to people who are actually living these lives.

In Little & Lion, Suzette is made to feel ashamed about parts of her life and thus feels compelled to hide them. I grew up with people who believed they needed to hide their sexual identities because it made them too different in our small, homogenous town. And I’m certain there are people in several generations of my black Southern family who have felt the same, either keeping their romantic lives private or disengaging completely from the family to avoid potential judgment. I also know people whose bilingual parents didn’t teach them Spanish because they feared it would make them too different to be accepted.

Telling others that their identities are too diverse to be believable is erasure. It perpetuates the idea that we should all think and look and act the same, and that people can and should only concentrate on one aspect of their identity. Identity is at once private and also quite public in some instances.

Novels are fiction, but we know they can act as windows—a glimpse into the lives of people who look or act or believe differently than us. Too many children and teens don’t have the good fortune of growing up in diverse or inclusive neighborhoods and towns, and a book might be the closest they can get to learning about unfamiliar cultures and communities. Which is only a good thing, because books that serve as windows foster empathy.

I’m hopeful for the future of children’s literature and grateful that kids and teens have the chance to read a much more diverse array of books than I had when I was young.

And I hope there will be a day in the near future when people don’t find it unusual or unrealistic to read about a girl who just happens to be black, bisexual, and Jewish

Brandy Colbert was born and raised in Springfield, Missouri. Her debut novel, Pointe, won the 2014 Cyblis Award for young adult fiction and was named a best book of 2014 by Publishers Weekly, BuzzFeed, Book Riot, and more. She was chosen as a Publishers Weekly Flying Start for spring 2014. Brandy works as a copyeditor and lives in Los Angeles, California.

When Suzette comes home to Los Angeles from her boarding school in New England, she isn’t sure if she’ll ever want to go back. L.A. is where her friends and family are (along with her crush, Emil). And her stepbrother, Lionel, who has been diagnosed with bipolar disorder, needs her emotional support.

But as she settles into her old life, Suzette finds herself falling for someone new…the same girl her brother is in love with. When Lionel’s disorder spirals out of control, Suzette is forced to confront her past mistakes and find a way to help her brother before he hurts himself–or worse.

Want to know even more about Little & Lion? Listen to our LB School Podcast interview with Brandy Colbert here.