The Cape Arago Highway west of Charleston leads to some of the most dramatic beaches and interesting state parks on the coast. Among the several beaches on the road to Cape Arago, the strand at Sunset Bay State Park (13030 Cape Arago Hwy., 541/888-4902 information, 800/452-5687 reservations) is the big attraction because its sheltered shallow cove, encircled by sandstone bluffs, is warm and calm enough for swimming, a rarity in the Pacific Ocean north of Santa Barbara, California. In addition to swimmers, divers, surfers, kayakers, and boaters, many people come here to watch the sunset. Local legend tells that pirates hid out in this well-protected cove.

A spectacular four-mile cliff-side segment of the Oregon Coast Trail runs from Sunset Beach south to Cape Arago. Good views of Cape Arago Lighthouse across the water can be seen along this route. Listen for its unique foghorn. For a short hike, follow the signs from the mouth of Big Creek to the viewpoint overlooking Sunset Bay.

The Cape Arago Lighthouse is on Chief Island and was linked to the mainland by a steel-truss bridge. For the local Coos Indians, Chief Island and the adjacent shoreline were a traditional burial ground, though after the building of the first lighthouse in 1866, the Coast Guard no longer allowed native burials. However, the island continued to have a sacred significance for the Coos.

A total of three different structures have served as the lighthouse on Chief Island. Then, after 140 years of service, on January 1, 2006, the lighthouse was decommissioned. Oregon’s congressional delegation in 2008 successfully maneuvered to transfer Chief Island, the adjacent shoreline, and the Cape Arago Lighthouse to the Confederated Tribes of the Coos, Lower Umpqua, and Siuslaw Indians. As part of the agreement, the Native Americans have pledged to maintain the lighthouse and make it available “to the general public for educational, park, recreational, cultural, or historic preservation purposes at times and under conditions determined to be reasonable by the Secretary of the Interior.” The island will again primarily be used as a burial ground, though the tribes have also discussed building an interpretive center on the mainland. However, the bridge to Chief Island has been removed, and the lighthouse and Chief Island are currently not open to the public.

Campsites, facilities: There are 66 sites for tents or self-contained RVs, 63 sites with full or partial hookups for tents or RVs up to 47 feet long, a separate area for hikers and bicyclists, eight yurts, and two group camps for up to 25 and 250 people, respectively. Drinking water, picnic tables, garbage bins, and fire grills are provided. Restrooms with flush toilets and showers, a fish-cleaning station, boat ramp, and firewood are available. A camp host is onsite. A gazebo and meeting hall can be reserved at nearby Shore Acres. A restaurant is within three miles. Some facilities are wheelchair accessible. Leashed pets are permitted, except in yurts; one yurt is pet friendly. 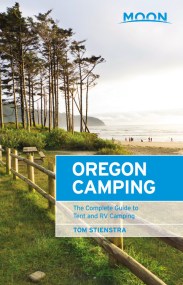 Grab your sleeping bag, pack the car, and discover the best spots to camp in the great outdoors with Moon Oregon Camping.