1. Rain aside, what type of climate should visitors comes prepared for?

The climate in Portland is actually quite temperate, but the skies can be a bit fickle during transitional months. Snowfall is pretty rare, but a cold snap or two is most likely to happen between December and March, when the snow and ice sometimes venture far enough from the ski slopes to show up on the city streets. Summer months are usually dry with temperatures averaging around 70–85°F and the occasional 100°F scorcher come July and August. Fog is fairly common in the early mornings, but usually burns off before lunchtime.

2. How can visitors make the most of rainy days?

Embrace it! Oregonians are sometimes affectionately referred to as web-footers, and it’s because life never stops for a little bit of rain. Chuck the umbrella (it will probably be too windy anyway) and invest in a waterproof windbreaker or anorak that you can slip off during sun breaks. If you’d rather stay dry, there are a number of museums and attractions that can easily occupy the better part of a rainy afternoon. Oregon Museum of Science and Industry (OMSI) is a good bet for both kids and grown ups, while the Portland Art Museum has over 112,000 square feet of sculptures, paintings, and exhibits for art lovers to explore. Bibliophiles will want to make a beeline to Powell’s City of Books, which occupies a full city block and could easily keep you busy through a three-day monsoon.

3. What’s the best way to get around town?

Thankfully, Portland is a very walkable city, with wide sidewalks, clearly labeled intersections and short blocks. Much of the city is on a grid and was designed with pedestrians and cyclists in mind, so it is fairly easy to navigate. Walking straight from one end of downtown to the other would take most people about 15 to 20 minutes, and most hotels and visitor’s centers have free walking maps available which detail the shops, restaurants, and attractions along the way. The public transportation system in Portland is also reliable and user-friendly. Inside the downtown region, the Streetcar and MAX are free, so go ahead and hop on. Also, in Old Town and the Pearl District, there are a number of bicycle-driven rickshaws known as Pedicabs. The eco-friendly transport system is surprisingly quick and efficient and the drivers are oftentimes fonts of knowledge about the ins and outs of the city.

4. Portland has countless parks and open spaces, which ones do you recommend strolling through?

When most people think about city parks, they picture kids screaming through fountains and dog walkers dodging college students with laptops. And while Portland has those parks (think Jamison Park and the Park Blocks, respectively), Forest Park is the real gem. Mere steps away from the city, the 5,000+ acre park has a remarkable diversity of wildlife under a cool canopy of Douglas Fir, Western Hemlock and Red Cedar trees. There are miles of tree-lined trails to explore here, but a good place to start is at the Wildwood Trailhead, which can be accessed by walking north past the World Forestry Center in Washington Park. Another popular trail begins at Lower Macleay Park near NW Thurman Street. From this access point, you can embark on a 2 to 3 hour hike which will take you past a photo-worthy old stone house and the fantastic grounds of Pittock Mansion.

5. What does Portland have to offer gay and lesbian visitors?

Portland has a vibrant and diverse LGBT scene, thanks in part to the city’s penchant for art, creativity, self-expression, and individuality. A number of the city’s top chefs, designers, artists, business owners, and celebrities (including the mayor) are gay, and they have had a profound impact on the city’s tapestry. In fact, if you attend the Portland Pride Festival in June, you are likely to see Mayor Sam Adams riding along with the floats and drag queens on a bespangled bicycle. Pride Fest is just one of a number of fun festivals and events which are held throughout the year. Another example, the annual Red Dress Party is one of the most well-attended charity events of the year at which men and women alike don red dresses and raise a glass to charities that support gay and lesbian youth, AIDS awareness programs, and LGBT support centers. Sprinkled across the city and in neighborhoods like Old Town, the Hawthorne District and the Alberta Arts District, LGBT travelers will find a number of restaurants, bars, galleries and attractions that are gay or gay-friendly. Furthermore, many of the city’s boutique hotels offer special romance packages to gay and lesbian travelers, some of which are discounted during LGBT events.

6. What can visitors expect from Portland’s live music scene?

Portland’s music scene is amazingly effervescent, and seems to both produce and attract musicians with passion, originality, and panache. The city has a robust punk scene that dates back to the 1980s when clubs like Satyricon (where Kurt Cobain met Courtney Love) reigned supreme. Back then, blues and jazz were big too, and still today Portland plays host to one of the world’s best blues festivals, and a jazz festival that brings in some of the top artists around. The city’s nationally recognized jazz scene is bumping these days with a number of talented young players, legendary musicians like Mel Brown, and clubs like Jimmy Mak’s leading the charge. And of course, Portland is home to some of the world’s best indie music, with such talents as Everclear, Pink Martini, The Decemberists, The Dimes, The Dandy Warhols, Helio Sequence, M Ward, Modest Mouse, and The Shins calling Portland home. Any given night of the week you can find some of the industry’s top talents playing at venues like The Aladdin, Doug Fir Lounge, the Crystal Ballroom, the Roseland, and Dante’s. Pick up the Portland Mercury or the Willamette Week from most bars, restaurants, coffeehouses and street corners to find out who is playing and where.

7. In your opinion, what is Portland’s number one attraction?

Inspiration. Ok, it’s not a venue or a landmark, but it practically flows down the streets with the rainwater. Dine in a few restaurants and you will understand why everyone is buzzing about the food scene. Duck into a few galleries on First Thursday and you will find it there too. Hunker down at a coffee shop and strike up a conversation with a local about their next big project and you’ll feel it start to affect you too. There is an undercurrent of creativity in this city that makes people want to live here or visit here, and dig their fingers deep into the things that they are passionate about. It is the reason the city is home to so many amazing artists, chefs, musicians, and writers. Over and over again, I talk to people who say that they came to Portland for some innocuous reason and were suddenly, inexplicably drawn to the city’s creative energy.

8. What’s your favorite neighborhood, and why?

I’m a huge fan of the Hawthorne area because it has all my favorite things in about a ten block stretch: Powell’s, thrift stores, artisan cheese, wine, and kitschy vintage shops. I have a routine that usually starts with coffee at Starbucks, shoe shopping at Buffalo Exchange, dress shopping at Crossroads, vintage slips at Red Light, lunch at The Bagdad, groceries from Pastaworks, and a frozen yogurt from Swirl. I’d like to say that this is a once-in-a-while occurrence, but I do this about two or three times a month.

9. What part of town has the best eats?

Honestly, it depends on what you are looking for, but if you want really great food for next to nothing, head to one of the city’s food cart clusters. There are a number of them downtown and all you have to do is look for the crowd of locals to find the really popular ones. Portland is getting national attention from the likes of The New York Times, Bon Appetite, and Sunset for its rebellious take on dining. In these carts, it’s all about the food, or more specifically, it’s all about the soup, or the French fries, or perogies. Each cart has its own specialty and the not-so-secret secret around here is that they do it better than most of their brick-and-mortar compatriots. Most of the carts are clustered in parking lots downtown, occupying the blocks around SW 4th and SW Hall, SW 5th and SW Stark, SW 9th and SW Yamhill, and SW 3rd and SW Washington, but there are notable clusters scattered all over the city. The best website to check out for up-to-date info on the best and brightest carts is www.foodcartsportland.com.

That’s like Sophie’s Choice! I go through cycles that largely depend upon the season because I like a good hearty stout (like the Alameda Black Bear XX) in the winter, a fruitier wheat beer (like McMenamin’s Ruby) in the Fall, and an IPA (like Amnesia’s Copacetic IPA) in the summer. My overall favorite right now for their across-the-board good brews and their food is Hopworks Urban Brewery (HUB). Every time I go, I have to talk myself out of a huge stein of their organic Seven Grain Stout (which goes perfectly with the Black Pepper and Garlic Beer Sausage). Fortunately for my waistline, I’m also a big fan of their Crosstown Pale Ale paired with a really tasty salad that has fresh local pears, Rogue River blue cheese and housemade vinaigrette.

11. What activities do you recommend for outdoor enthusiasts?

Rent a bike! Bicycle magazine named Portland one of the ten best cities in North America for two-wheeled enthusiasts and there are a number of trails where you can get a good look at the city. Take an exploratory ride along the waterfront loop or through Mt. Tabor Park, or opt for a guided tour. If cycling isn’t your thing, try kayaking, hiking, or golfing. And of course, one of the best things about Portland is its proximity to the mountains and the Pacific Ocean, so skiing, snowboarding, surfing, and fishing are only a hop and a skip away. 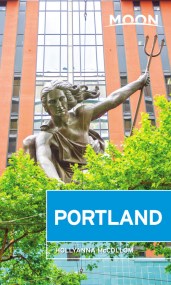 With funky neighborhoods, an innovative spirit, and famed music, food, and beer scenes, Portland is truly a one-of-a-kind city. Discover it for yourself with Moon Portland.