The only pass across the Green Mountains for 25 miles, Middlebury Gap was designated as a scenic byway by the state of Vermont as early as 1897. Route 125, which climbs steeply up from Middlebury to its peak at the village of Ripton before plunging just as precipitously down the other side, is lined with a dense forest of maple and birch mixed in with boreal spruce and fir. The route is best driven during the fall, when the foliage puts a lie to the mountains’ name with a brilliant symphony of red and yellow leaves.

One thing is for sure—New England’s preeminent 20th-century poet got around. Sites where he lived in New Hampshire, Massachusetts, and Vermont can all lay claim to significant chunks of his life. But perhaps none of them quite capture the spirit of his poetry more than this 1.2-mile walking trail located just past Ripton, near where Frost spent each of his last 22 summers. The trail begins by a parking lot at the Robert Frost Wayside Area, on the south side of Route 125, two miles east of Ripton, four miles west of Middlebury Gap.

As the path wends its way through a gentle terrain of forest and meadow, it is studded with plaques containing some of his poems set at contemplative spots along the way. The placement of the poems, which include “The Last Mowing” and “Stopping by Woods on a Snowy Evening,” has an uncanny way of teasing out more meaning from the lines with the smell of pine boughs or the chirping of a lonely bird above. In fact, the trail was developed by Middlebury professor Reginald Cook, a friend of Frost’s who used to hike with him in these very woods. The only poem that falls a bit flat is the “Road Not Taken,” situated at an intersection in the path with an arrow pointing out the right direction—which is clearly the road far more often taken.

When Frost summered in Middlebury, he was here for the Breadloaf Writers’ Conference (1192 Rte. 125, Ripton, 802/443-5000, Aug.), one of the first retreats to bring working and aspiring writers together each summer for inspiration. The conference has grown in stature for more than 80 years; in addition to Frost, guests have included John Irving, Toni Morrison, and Norman Mailer. Now it lasts for 10 days in August, taking place in the little town of Ripton in the mountains 10 miles east of Middlebury; many of the readings by distinguished writers are open to the public. 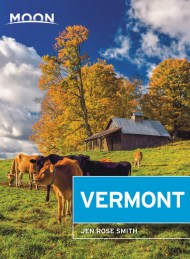