1. What inspired you to travel with the environment in mind, even years ago before it was as popular as it is today?

In my travels, I’ve always tried to see things through local eyes. I travel as the locals do. In my guidebooks, whenever there’s a social, economic, or political issue I need to cover, I take the local side. So when I had to write about the nuclear testing program in French Polynesia in the 1980s, I roundly condemned it while virtually all other travel guidebooks writers were looking the other way. When the San Diego tuna fleet refused to pay licensing fees to fish in Solomon Islands waters because the tuna were “migratory,” I wrote it up as a clear case of people from one of the richest countries on earth stealing from one of the poorest. Looking back at backgrounders I wrote more than two decades ago, I wouldn’t change a word.

2. What are some ways in which you practice eco-friendly travel?

When I’m in a place, I avoid energy-hungry tourist transport, such as rental cars, air-conditioned tour buses, and island resort shuttles by helicopter or seaplane, and use the same boats and buses the locals use. One reason Bermuda has such an excellent system of public transportation is that rental cars are banned on the island. I also eat in restaurants and cafés where I see the local people eating. I stay in small locally owned guesthouses and hostels. I walk a lot. Thus I don’t think my presence consumes many resources, and rather, I strive to strengthen facilities that are also of use to the people who live there.

3. In addition to the growth in the popularity of ecotourism, what are some changes you’ve seen in environmentally friendly travel over the years?

Tourism is a consumption-based industry, and unfortunately much of what is called “ecotourism” is fraudulent. You don’t help the environment by sending tour groups into unspoiled natural areas. Unless, of course, the alternative is logging or mining. As tourism advances, nature retreats. In my opinion, the best framework for sustainable ecotourism is through the creation of national parks and reserves, and the growth of protected areas in Fiji, Samoa, and a few other South Pacific countries is commendable.

4. Many travelers express an interest in environmentally friendly travel, but time and money are also big factors when planning a trip. What advice can you give about how to consider the environment along with more logistical matters?

It’s surprisingly easy to travel lightly. When planning your route, select areas away from the main resorts. The travel industry almost always inflates prices, and you could be paying half as much if you’re willing to forego air-conditioned suites, jet boats, seafood buffets, and organized entertainment. The easiest and least expensive way to approach nature is on foot or by swimming with a mask and snorkel. Why stick to the beaten tourist track when you can have the real thing at far less expense on the other side of the island?

5. Travelers—especially Moon readers—maintain a certain level of skepticism toward claims of eco-friendliness, ever wary of “greenwashing.” What tips do you have on how to make sure our dollars are going toward truly green and sustainable travel businesses?

That’s easy: Go green by giving your money to local people. I’m always amazed when I read that some high-powered resort has won a “green” award. It’s fine to dispose of solid wastes properly, but the resort itself generated those wastes! It’s actually a simple matter to identify “greenwashing” in tourism. Just look for air-conditioning, speedboats, land cruisers, imported food and drink, and large advertising budgets. For real ecotourism, check out the national parks and reserves in the area you wish to visit, and book with local outfitters who are sensitive to nature. Their websites should give you a feel for their approach. Or just stay in a family-run guesthouse or beach resort—and follow the advice of your hosts.

6. Some in the travel guide business, including the founder of Rough Guides Mark Ellingham, have spoken out about the impact of travel, specifically air travel, on the environment and the need to lower tourism’s carbon footprint. How do you reconcile the many miles you fly to the destinations you cover with your commitment to low-impact travel?

Yes, there’s the rub. The genuine ecotourist will stay home and spend their leisure time exploring their own area. I live on Vancouver Island, Canada, and have created a Nanaimo 50-Kilometer Holiday to encourage residents to travel locally. Mind you, I do see the irony in flying halfway around the world several times a year, as I do. But by going local and using the facilities used by the local population, you inject money directly into the local economy and get a taste of things as they really are. Tourism that spurs environmental, cultural, or historical preservation is beneficial.

7. What are some recent developments in green tourism that you’ve encountered in your travels that you’ve been encouraged or inspired by?

The growth of family-operated village beach resorts in Samoa over the past decade has been one of the great success stories of Pacific travel. You share the lifestyle of your hosts by sleeping on a pandanus mat under a thatched roof, eating local fish, fruits, and vegetables. Footpaths lead through the gardens and up the volcanic slopes while underwater trails extend out to the brilliant reefs. It’s a perfect symbiotic relationship: Local families are able to earn a reasonable living without leaving their home villages while visitors are embraced by the warm Samoan culture and environment. The village resorts of Samoa are the measure by which I judge other tourism developments around the Pacific. You’ll find something similar in the Yasawa Islands of Fiji, although getting around those islands is by energy-guzzling highspeed catamaran rather than local bus. Along the same lines are the ubiquitous family-run pensions of French Polynesia. I actively promote such facilities in my guidebooks, and it’s sort of satisfying when I see other guidebook writers following in the same vein.

8. We’ve worked together on a number of books, including two editions of Moon Fiji. Since I’ve never been to Fiji, I’ve developed a picture of it from your book as a number of lush, natural islands, with amazing multi-day treks, remote waterfalls, and traditional thatched bure, not the manicured isolated paradise of the high-end resorts. But, it’s the latter that make up a big part of the traveler’s image and experience. In your books, how do you balance the type of travel you want to encourage with the reality of tourism on these islands and what travelers might want and expect based on images they’ve received elsewhere?

Your picture of paradise is not far off, and I believe it’s equally possible to live the dream whether you’re sleeping in a tent on the beach or staying at a thousand-dollar-a-night boutique resort. In my guidebooks to Fiji and French Polynesia I cover all levels of travel. If someone wants to spend a thousand dollars a night, that’s their business. My business is to see that they get the best value for their money. But after almost 40 years on the road, I still wear a backpack, and while researching my books, I do my best to ensure that all travel options are covered. That’s the difference between my guides and those of my competitors. I also don’t accept freebies so you won’t hear me hyping some fancy restaurant or resort just to repay hospitality. I don’t leave out hotels or attractions because I think they’re “beneath” my readers or are politically incorrect. That’s not for me to decide. But I do try to give a complete picture of each place so that readers can make an informed decision.

9. Sustainable travel or low-impact travel is not only about preserving the natural environment, but also about supporting local communities. How do these two aspects go together?

When paying guests show an interest in the natural environment or traditional culture, local people usually take note and try to preserve those things. And when businesses and governments recognize that it’s more profitable to preserve the environment than to exploit it, the battle is half won. In the Cook Islands, a ban on fishing off the southeast coast of Rarotonga has allowed the marine life to proliferate for snorkelers. Subsistence whaling was practiced in Tonga until 1979, but today the Tongans do everything in their power to protect the schools of humpback whales that come to their islands from July to October to bear their young as the country’s tourism industry depends on it. It’s tragic when a small group selfishly destroys a resource or environment for short-term gain. That’s why Japanese whaling in Antarctica, commercial seal hunting in eastern Canada, and deforestation in the Amazon basin are so terrible. They rob us all of irreplaceable resources.

10. What got you into guidebook writing in the first place? Did you have a different career before that?

Before becoming a guidebook writer, I worked for a Canadian tour operator as a destination representative in the Caribbean islands. I’d take half the year off to travel the world. One of my trips took me to Indonesia where I used Bill Dalton’s Traveler’s Notes as a guide. I sent Bill some feedback, and we began corresponding. The next year I’d planned to island hop across the South Pacific, and I suggested to Bill that he add notes on those islands to his Indonesia guide. Bill replied that his book was growing too fast and a separate guidebook was required. The first edition of South Pacific Handbook was published in June 1979 with Bill and I as co-authors. Soon after, Bill stepped aside to devote himself to publishing, and I researched and wrote the subsequent seven editions single-handed. It wasn’t easy to decide to discontinue Moon Handbooks South Pacific in 2004 but by then the book had become uneconomic. Dropping the regional guide allowed me to zero in on Fiji and French Polynesia, two of my favorite South Pacific countries.

11. What do you love most about the South Pacific?

The best thing about the South Pacific is the variety. Every island seems to have a different culture and environment, all of them unique and wonderful. It’s always a treat to visit an island for the first time or to revisit one I haven’t seen for many years. There’s no way you could exhaust all the travel possibilities in the South Pacific in one lifetime. I don’t think anyone should be allowed to write a guidebook about a place they don’t love. 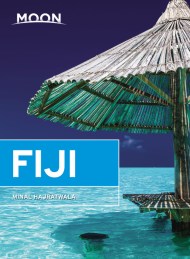