Shorty Harris and E. L. Cross sparked the birth of Rhyolite in 1904. While prospecting in the area, they found gold in the Bullfrog Hills, named for their green-spotted rocks. Thousands of people began streaming into the area. The first post office opened in 1905; at its peak in 1907-1908, Rhyolite was probably home to between 3,500 and 5,000 people. The town boasted an ice cream parlor, a school, an ice plant, banks, and a train station. As quickly as Rhyolite sprang up, it started to deflate when the financial panic of 1907 kicked off a rush in the opposite direction. By 1911, the mine had closed, and by 1920, the last holdouts had dwindled to 14 lonely souls.

Today, the main road through the ghost town leads past crumbling banks once bursting with gold. Some ruins are two stories tall, towering like era monuments. The beautiful mission-style train station remains intact and looks like it could open tomorrow. Side roads lead to the red-light district, cemetery, and mine ruins.

Rhyolite might be most famous for its bottle house, built by enterprising miner Tom Kelly out of a plentiful material on hand—beer and liquor bottles. It took over 50,000 bottles to make this structure, which was restored by Paramount Pictures in 1925, as Rhyolite began to be used as a filming location.

The Goldwell Open Air Museum (1 Golden St., 702/870-9946, year-round, free) is a sculpture installation and art park located next to Rhyolite, sharing the land and the desert backdrop. Belgian artists began the museum in the 1980s using the surreal location to showcase larger-than-life sculptures.

The Last Supper, Lady Desert: The Venus of Nevada, and Tribute to Shorty Harris are all impossibly big and very haunting. The Last Supper, the most prominent piece, features ghostly life-size hollow figures huddled on a wooden platform in an eerie plaster sculpture rendition of Leonardo Da Vinci’s famous fresco. The Venus of Nevada represents a 3-D woman made of 2-D computer pixels; it stands larger than life, pink and yellow cinder blocks incongruous against the desert browns and golds. An oversize mosaic couch dwarfs anyone who sits on its riot of bright colors. Other sculptures are a nod to the desert setting. One abstract metal sculpture is intended to be a portrait of Shorty Harris, a desert prospector. A totem-like pole tells the story of Icarus, who flew too close to the sun in Greek mythology, an appropriate statement in the desert. Taken together, the collection is disjointed and surreal against the desert landscape.

A tiny Visitors Center (10am-4pm most days) sits centrally located among the sculptures, with T-shirts and museum gifts for sale; there are no services.

Rhyolite is located approximately four miles west of Beatty, Nevada, off of State Highway 374. Take Highway 374 west from Beatty and turn right into the well-marked entrance.

From Stovepipe Wells, Rhyolite is about 30 miles northeast. Head east on Highway 190 to Daylight Pass Road. A well-marked entrance on the left indicates the two-mile road to Rhyolite. Plan to spend an hour or two strolling among the crumbling buildings and art. 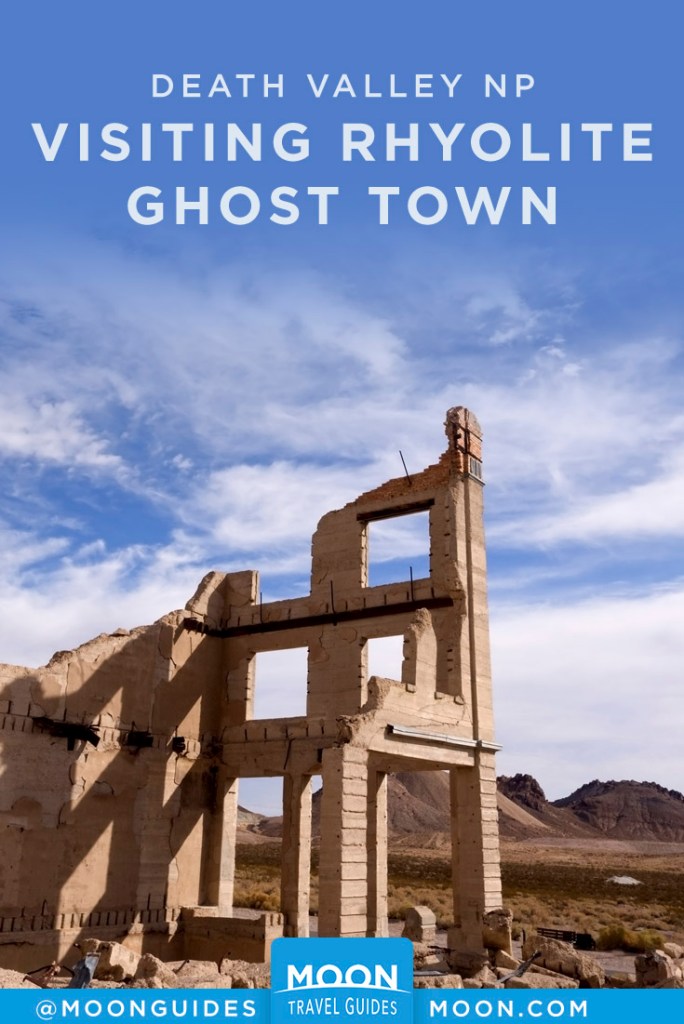