The People’s Guide to Mexico authors Carl Franz and Lorena Havens have been exploring Mexico since the early 1960s. The warm, easygoing style and personal insights of the writer and editor team have inspired generations of travelers. When not on the road—or living somewhere in Mexico—they can usually be found at their cabin in the North Cascades of Washington. We asked Carl and Lorena to share with us some of their background and the history of the book.

1. This is the 14th edition of The People’s Guide to Mexico and 2012 marks its 40th anniversary. Please tell us the story of how your book came to be.

The People’s Guide to Mexico began on a Mexican beach in 1970 as a series of detailed letters to friends in Alaska who were eager to join up with Lorena, Steve and myself on our first major van odyssey through Mexico. It developed further through storytelling around countless campfires as we traveled on to Guatemala, El Salvador and Belize.

There were no guidebooks at the time that explained how to travel in Mexico and Central America in more than general terms. Our friends and other travelers constantly peppered us with practical questions—how to take a local bus, where to eat cheaply, how to find a budget hotel room and more. With Steve looking over my shoulder and contributing his vast personal experience, I started hammering away on my Olympia portable typewriter. I was easily bored, however, and tended to drift off-topic into stories about our current adventures. Lorena applied her organizational skills in an attempt to keep me focused.

In a small house overlooking Lake Atitlan the manuscript piled beside me eventually reached over one thousand typewritten pages. It became apparent that things had gotten out of hand. Was it a book? Everyone we asked said the answer was obviously, “No!” Who would possibly publish an unknown author writing about off-beat Mexico?

On our slow return northward, we visited John and Eve Muir in San Miguel de Allende. John’s book, How To Keep Your Volkswagen Alive was selling like crazy and he’d decided to start his own publishing company. He and Eve took a quick look at our manuscript—the rest, as they say, is history.

2. How has traveling in Mexico changed since the ’70s and how is the travel experience the same?

There is no aspect of traveling in Mexico that hasn’t changed dramatically since the seventies, at least in a practical sense. In those days, for example, there were almost no road or directional signs, even on major highways. It wasn’t just easy to get lost and confused, it was inevitable; an integral part of the Mexican experience.

People weren’t used to seeing foreign travelers outside of the most obvious tourist attractions and resorts. Anyone who didn’t look like the typical gringo resort-hopping tourist drew a lot of attention, some of it definitely unwanted (especially from the police).

Mexico’s public service infrastructure was very weak and unreliable—it often took hours and a lot of pesos to make an international phone call. Changing traveler’s checks was a drag.

Of all the changes we’ve seen, however, I don’t think anything can top the arrival of the internet and cell phones. Second on the list would be the tremendous improvement in highways and transportation.

What hasn’t changed in Mexico, or not as much? The hospitality and generosity of the Mexican people, as well as their incredible sense of humor.

3. The People’s Guide to Mexico is often cited as one of the books that launched the independent travel movement. What is your reaction to this?

Since The People’s Guide was first published in 1972, we’ve received thousands of letters, emails and personal testimonials from people who say that the book gave them the confidence and tools they needed to visit Mexico. So, yes, in that sense we did inspire others to grab a backpack or a suitcase and head out. It isn’t easy to remember, but in the sixties and early seventies tourism outside of the U.S. was almost exclusively for people with money. The People’s Guide was for the rest of us—“independents” with more time than money, along with a strong curiosity and appreciation for the “real” Mexico.

As an aside, one of the most gratifying compliments we heard in the book’s early days was from travelers who recommended it for travel to India and Asia. “The People’s Guide is the best guidebook to travel in the Third World” was the way one person put it.

4. What’s the one site/activity/experience in Mexico that should be on a traveler’s “bucket list”?

My “bucket list” tends to be filled with apparently ordinary experiences that travelers ordinarily do not think of when away from home. For example, I’ve had haircuts in small town barbershops in Mexico, India and other countries. It’s an experience I don’t necessarily want to repeat but one I seldom forget.

If you are near a beach, there’s nothing more Mexican than spending an entire afternoon in a seaside restaurant, eating and drinking your way through the menu, one delicious dish after another. Hire a taxi for an hour in any mid-sized city and ask the driver to show you the sights. I can’t pass up a Mexican hardware store or street market without looking for handmade tools and ingenious mouse traps.

Lorena’s suggestion is to take a morning bus to a small town you’ve never heard of, eat breakfast there, have your shoes shined and wander the streets. Lorena looks for yarn and interesting little gifts as an excuse to poke her head in small shops. Smile a lot. 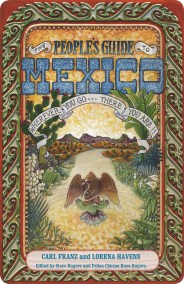 The People's Guide to Mexico

Over the past 40 years, hundreds of thousands of readers have agreed: This is the classic guide to 'living, traveling, and taking things as they come'in Mexico.